Arsenal take on Olympiacos at the Emirates this evening. Here’s a preview with team news, likely line-ups, betting tips and predicted score for the game.

Arsenal will be hoping to get their Champions League campaign off-and-running when they take on Olympiacos at the Emirates this evening.

The Gunners slumped to a disappointing 2-1 defeat away to Dinamo Zagreb two weeks ago and another poor result tonight would leave us with it all to do to secure qualification from Group F.

We head into the game in decent form having beaten Tottenham in the Capital One Cup before thrashing Leicester 5-2 on Saturday so hopefully we can make it three wins on the bounce tonight.

Olympiacos also suffered defeat on matchday one having been beaten 3-0 at home by Bayern Munich but they can be a dangerous side on their day so we shouldn’t be taking anything for granted.

We’ve been handed a timely boost as Francis Coquelin is back in contention after recovering from a knee injury that kept him out of our last two games.

Mikel Arteta is out after picking up a muscle injury against Leicester while Mathieu Flamini is also unavailable after being forced off with a hamstring problem last time out.

Arsene Wenger is expected to start David Opsina in goal with Petr Cech rested while Aaron Ramsey is also set to be given a breather ahead of Sunday’s clash with Manchester United.

Gabriel is available again after serving his one-match domestic ban but Olivier Giroud won’t feature after being sent off in Croatia two weeks ago.

As for Olympiacos, they’ll be without midfielder Luka Milivojevic as he serves the second match of a two-game ban while defender Manuel da Costa is doubtful after picking up a calf injury.

Alejandro Domínguez, Giannis Maniatis and midfielder Andreas Bouchalakis are all set to miss out through injury. 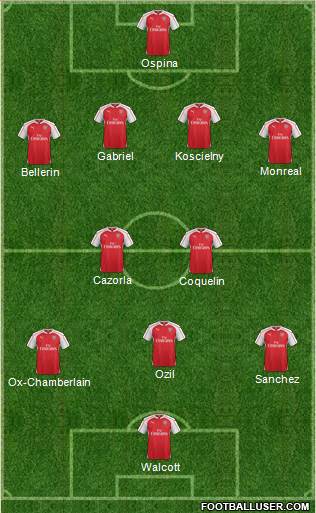 Arsenal 3-0 Olympiacos: We looked excellent going forward on Saturday and if we can replicate that kind of form this evening, I can see us easing to a comfortable victory. I expect Walcott to continue his goal-scoring form is the visitors play a high line.

Arsenal are the 2/5 favourites to win the game but Football-Talk can get you enhanced odds of 4/1 on a home win tonight. My prediction of 3-0 is on offer at 17/2 while I also like the look of Theo Walcott to open the scoring at odds of 4/1. If we combine those two bets in a score-cast, then we get very tempting odds of 22/1.