Three Arsenal stars have joined players from Liverpool and Tottenham in this weeks WhoScored Premier League Team of the Week. Check out the full team here

Three Arsenal stars have joined players from Liverpool and Tottenham in this weeks WhoScored Premier League Team of the Week.

The Gunners ran riot at the King Power on Saturday with Alexis Sanchez hitting a superb hat-trick en route to a thrilling 5-2 victory over Leicester City.

The Chilean not only makes the Team of the Week but he has also won the Player of the Week thanks to his perfect 10/10 score for his performance at the weekend.

Sanchez is joined in the team by Cazorla who pulled the strings against Leicester to earn a score of 9.06 while full-back Monreal also makes the cut after his two assists helped him to a score of 8.72.

Liverpool midfielder James Milner also makes the TotW after scoring during the Reds 3-2 victory over Aston Villa but team-mate Daniel Sturridge just misses out despite bagging a brace at Anfield.

Tottenham have two representatives in the team with Erik Lamela’s impressive display during their 4-1 win over Manchester City earning him a score of 8.76 while Kyle Walker is also in thanks to a score of 7.80. 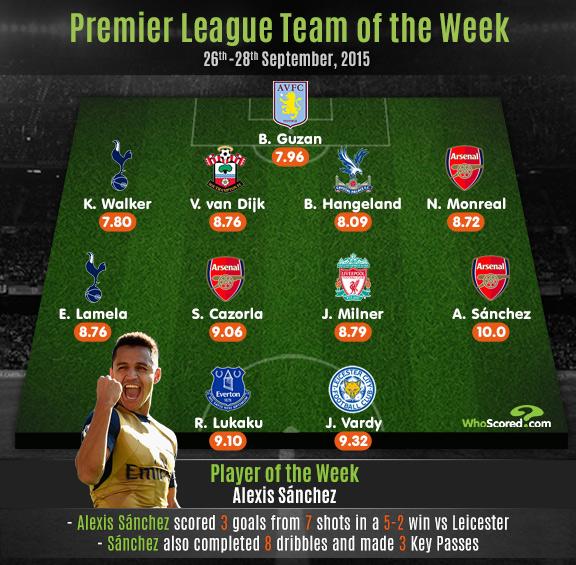