Tottenham take on Monaco in the Europa League tonight. Here’s a preview with team news, likely line-up and predicted score for the game.

Tottenham will look to make it back-to-back wins in the Europa League when they take on Monaco at the Stade Louis II this evening.

Spurs kicked off their European adventure with a 3-1 victory over Qarabag at White Hart Lane two weeks ago thanks largely to a brace from Heung-Min Son.

The North Londoners head into this game off the back of a superb 4-1 win over Manchester City so they should be full of confidence as they arrive in the principality.

Monaco could prove to be a tough test for Mauricio Pochettino’s men as they reached the quarter finals of the Champions League last season and are a tough side to beat at home.

However, the Ligue 1 outfit have endured a disappointing start to the season having won just three of their eight domestic games so far and their latest result was a 3-3 draw with Guingamp that saw them relinquish the lead three times.

Monaco had to settle for a 1-1 draw at Anderlecht on matchday one so they’ll be hoping to pick up their first three points of the campaign on home soil this evening.

Pochettino is expected to shuffle his pack once again with several of his first team regulars set for a rest after playing four games in 11 days.

Jan Vertonghen, Kyle Walker and Harry Kane are among those set to be given a breather with Kieran Trippier, Kevin Wimmer and Andros Townsend likely to feature.

Summer signing Clinton N’Jie could start up front as Heung-Min Son has been ruled out with a muscle injury that he suffered against Man City at the weekend. 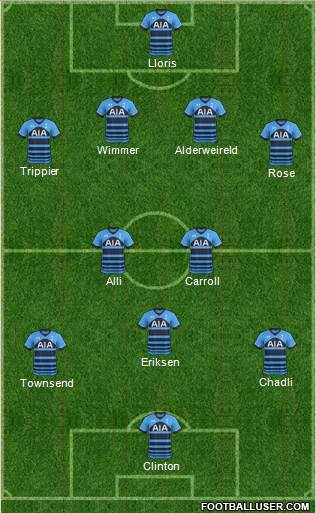 Monaco 1-1 Tottenham: This is going to be a tricky game for an under-strength Tottenham side but Monaco have been struggling this season and I can see the North Londoners taking something away from the game tonight.

Monaco are the narrow 6/5 favourites to win the game but my prediction of 1-1 is on offer at 11/2 while I also like the look of Nacer Chadli opening the scoring at 10/1. If we combine those two bets in a score-cast then we get very tempting odds of 55/1.