Man Utd will look to continue their excellent form when they take on Arsenal at the Emirates on Sunday. Here is the side I think Louis van Gaal will pick:

Man Utd  will look to continue their excellent form when they take on Arsenal at the Emirates on Sunday afternoon.  Here is the side I think Louis van Gaal will pick:

Defence: Antonio Valencia had a poor game against Wolfsburg on Wednesday night and was at fault for the Germans goal so van Gaal may decide to make a change at the back. This could see Matteo Darmian move across to right-back with Ashley Young coming in at left-back with both Luke Shaw and Marcos Rojo out injured.

Chris Smalling has been in excellent form so far this season and he should continue his impressive partnership alongside Daley Blind at centre-back.

Midfield: Michael Carrick was rested against Wolfsburg last night so he should come back in to the starting eleven alongside Bastian Schweinsteiger in midfield with Morgan Schneiderlin the most likely to drop out.

Ander Herrera and Marouane Fellaini may have to make-do with places on the substitutes bench once again.

Attack: Wayne Rooney has yet to hit top form this season and was once again below his best last night but I don’t see van Gaal dropping his captain against Arsenal so he should continue to play in the No.10 role this weekend.

Anthony Martial on the other hand continues to impress and he’s expected to lead the line with Juan Mata and Memphis Depay in support. 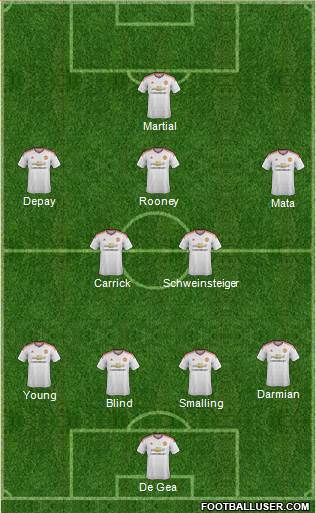