Manchester City’s Sergio Aguero leads the way but Arsenal dominate this week’s Premier League Team of the Week after their impressive win over Man Utd.

Manchester City’s Sergio Aguero leads the way but Arsenal dominate this week’s WhoScored Premier League Team of the Week after their impressive win over Manchester United.

The Gunners blew United away with three quick-fire goals inside the opening 20 minutes at the Emirates yesterday and four of Arsene Wenger’s men have made it into the team of the week.

Alexis Sanchez booked his place in the side after a sensational two-goal performance against United which earned him a score of 9.60 while his attacking partner Mesut Ozil also made the cut thanks to a goal and an assist against the Red Devils.

The Gunners were solid at the back too with Hector Bellerin and Per Mertesacker impressing during the win over United and their scores of 7.90 and 8.27 were enough to secure them places in the Team of the Week.

Manchester City were also in impressive form this weekend with Sergio Aguero unsurprisingly the star-man with his five-goal haul against Newcastle earning him a score of 10/10. Team mate Kevin De Bruyne also got a perfect mark for his performance against the Geordies.

Tottenham’s Christian Eriksen scored twice against Swansea on Sunday and his score of 9.26 saw him make the Team of the Week while Saido Mane also makes the cut for his display during Southampton’s 3-1 win over Chelsea.

Here is the full team: 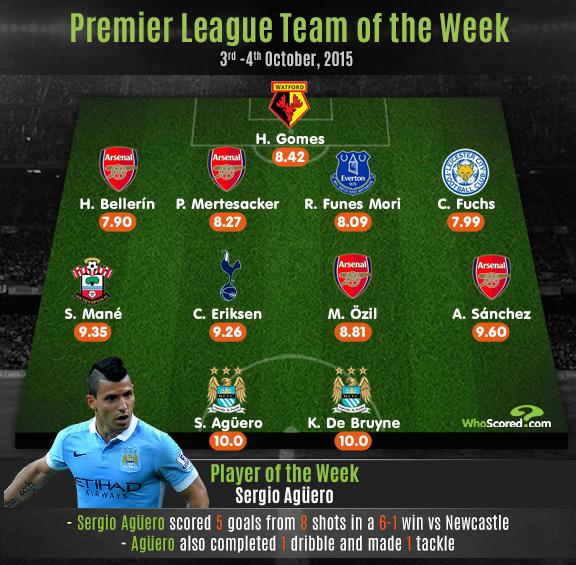