Premier League football returns as Arsenal take on Watford at Vicarage Road on Saturday evening. Here is the side we think Arsene Wenger will select.

Premier League football returns as Arsenal take on Watford at Vicarage Road on Saturday evening. Here is the side Gooner Mac thinks Arsene Wenger will select for the game:

Goalkeeper: Wenger is unlikely to make too many changes from the side that beat Manchester United before the international break which means Petr Cech is expected to continue between the sticks this weekend.

Defence: Laurent Koscielny is facing a late fitness test to see if he can return after a hamstring injury. If the French international is ruled out, then Gabriel should be partnered by Per Mertesacker at the back.

Hector Bellerin should retain his place at right-back while Nacho Monreal is expected to keep his place ahead of Kieran Gibbs on the left side of the defence.

Midfield: Mikel Arteta and Mathieu Flamini are both back in contention after recovering from hamstring injuries but they are likely to be on the bench as Francis Coquelin should continue in the holding role alongside Santi Cazorla.

Jack Wilshere is still at least a month away from recovering from ankle surgery.

Attack: Aaron Ramsey is likely to play on the right wing once again with Mesut Ozil expected to start in the number 10 role. However, we could see Alexis Sanchez rested after he played 180 minutes for Chile this past week despite carrying a hip injury.

Arsene hinted at his press conference this morning that he could give him a breather so Alex Oxlade-Chamberlain could start on the left side of attack. Theo Walcott expected to retain his place up front despite Olivier Giroud scoring twice for France earlier this week. 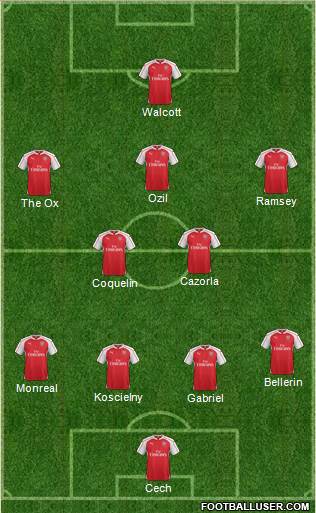