Arsenal will look to keep alive their Champions League hopes when they take on Bayern Munich on Tuesday. Here is the side we think Arsene Wenger will select.

Arsenal will look to keep alive their Champions League hopes when they take on Bayern Munich at the Emirates on Tuesday evening. Here is the side Gooner Mac thinks Arsene Wenger will select for the game:

Goalkeeper: David Ospina has started the previous two European games but Wenger has confirmed the Colombian will miss the Bayern clash with a shoulder injury which means Petr Cech will continue between the sticks after keeping another clean sheet at the weekend.

Defence: Gabriel Paulista is available after missing the win over Watford on Saturday and we could see the Brazilian come in to start alongside Laurent Koscielny at the back.

It will be a tough call for Wenger as Per Mertesacker is a hugely experienced defender and will know many of the Bayern players well but Gabriel’s superior pace may see him get the nod.

Elsewhere, Hector Bellerin should retain his place at right-back while Nacho Monreal is expected to keep his place ahead of Kieran Gibbs on the left side of the defence.

Midfield: I don’t expect the boss to make any changes in midfield so Francis Coquelin should continue in the holding role alongside Santi Cazorla. Mikel Arteta and Mathieu Flamini are both fit and should be on the bench but Jack Wilshere is still at least a month away from recovering from ankle surgery.

Attack: Aaron Ramsey is likely to play on the right wing once again while Wenger has rubbished the idea that he may rest Mesut Ozil and Alexis Sanchez for this vital game, so expect both of them to start in attack.

Olivier Giroud will have played his way in to the managers thoughts after coming off the bench to score against Watford on Saturday but I think we’ll see Theo Walcott continue to lead the line with the Frenchman used as an impact sub. 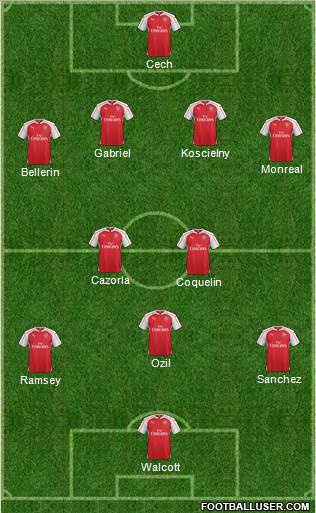