Arsenal boss Arsene Wenger and Chelsea manager Jose Mourinho have been shortlisted for the 2015 FIFA World Coach of the Year Award. See the full list here

Arsenal boss Arsene Wenger and Chelsea manager Jose Mourinho have been shortlisted for the 2015 FIFA World Coach of the Year Award.

Wenger steered Arsenal to a second consecutive FA Cup last season while the Gunners finished the campaign strongly to secure a third-placed finish in the Premier League and qualify for the Champions League for the 18th consecutive season.

Mourinho on the other hand won his third Premier League trophy at Chelsea after guiding the Blues to their first title in five years during his second spell at Stamford Bridge. It was part of a league and cup double as Chelsea also lifted the Capital One Cup thanks to a 2-0 win over Tottenham.

The duo join Luis Enrique on the 10-man shortlist for the 2015 FIFA World Coach of the Year with the Spaniard favourite to lift the gong after leading Barcelona to the treble having won the Copa del Rey, La Liga and Champions League during the 2014/15 season.

Chile coach Jorge Sampaoli is the only national team coach on the list after leading his nation to the Copa America last summer while other names on the list include Juventus boss Massimiliano Allegri, Sevilla’s Unai Emery, Laurent Blanc of PSG, Atletico Madrid chief Diego Simeone and Carlo Ancelotti – who left Real Madrid in the summer.

Here is the full 10-man shortlist: 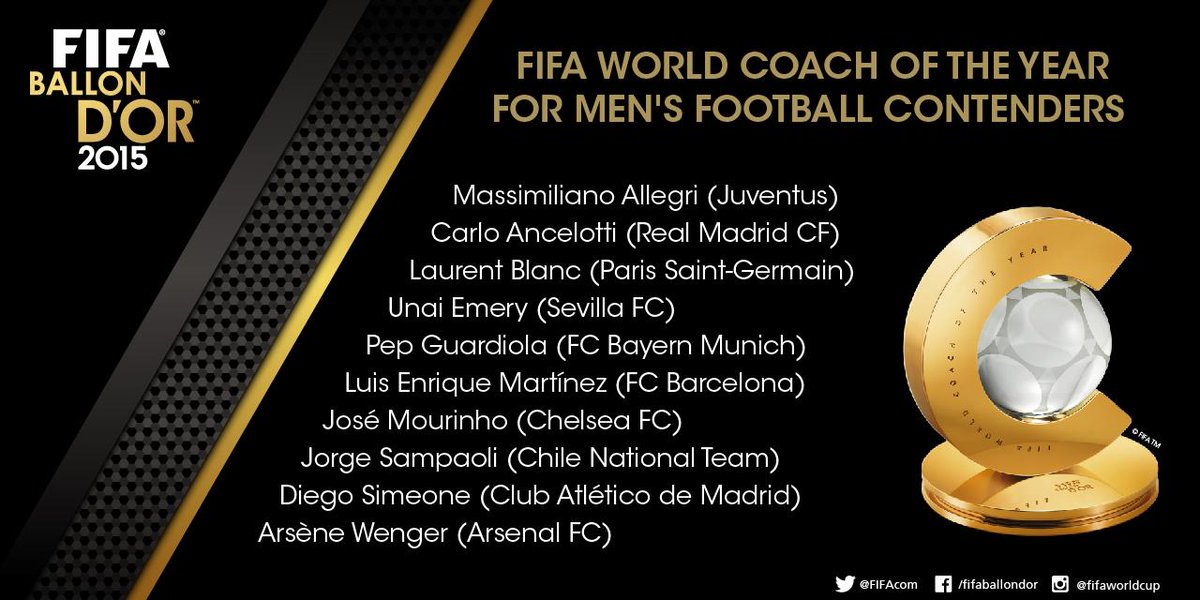