Chelsea take on Dynamo Kiev in the Champions League tonight. Here’s a preview with team news, likely line-up, betting tips and predicted score for the game.

Chelsea will look to get their Champions League campaign back on track when they face Dynamo Kiev this evening.

The Blues have hit a slump in form in recent weeks with Jose Mourinho’s position as manager coming under scrutiny after losing six of his last 13 matches in all competitions.

Saturday’s 2-0 victory over Aston Villa eased the pressure a little but Chelsea still languish in mid-table in the Premier League so Mourinho will be hoping for a morale-boosting victory in Europe.

The West Londoners got off to the perfect start in the Champions League with a 4-0 win over Maccabi Tel Aviv but slumped to a 2-1 defeat at FC Porto three weeks ago to leave them sitting third in Group G, so they desperately need a win tonight to get their qualification push back on track.

However, they face a tricky test away to Ukrainian champions Dynamo Kiev – who sit top of the group on four points after beating Tel Aviv away and holding Porto to a 2-2 draw at home.

Chelsea will be without the services of summer signing Pedro Rodriguez and striker Loic Remy after the duo were left back in the capital nursing minor knocks.

Branislav Ivanovic is also still unavailable as he continues to recover from the hamstring injury he sustained while away on international duty so he joins Thibaut Coirtois on the sidelines.

Eden Hazard could return to the starting line-up after being dropped for the Villa game while Gary Cahill could also come in to the back four in place of Kurt Zouma.

Oscar is pushing for a recall in attack while Nemanja Matic should come back in for youngster Ruben Loftus-Cheek in midfield. 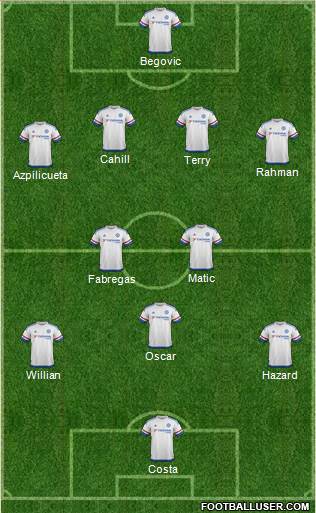 Dynamo Kiev 1-2 Chelsea: The Blues are certainly not the same side they were 12 months ago but they still have a great deal of quality within their squad. Away games in places like the Ukraine are always tough but I think Chelsea will just edge this one tonight.

Chelsea are the narrow 9/5  favourites but Football-Talk can get you enhanced odds of 8/1 on a Blues win if you click here. My prediction of 2-1 is on offer at odds of 9/1 and I also like the look of Diego Costa to opening the score at 5/1. If we combine those two bets in a score-cast, then we get very tempting odds of 28/1.