Liverpool, Arsenal, Manchester United and Manchester City all have representatives in the WhoScored Premier League Team of the Week. See the line-up here

Arsenal, Liverpool, Manchester United and Manchester City all have representatives in the WhoScored Premier League Team of the Week.

United got back to winning ways with an impressive 3-0 victory over Everton and Ander Herrera has been named in the side after earning a score of 8.97 having netted the second goal at Goodison Park.

Neighbours City were also in formidable form as they blew Bournemouth away 5-1 at the Etihad Stadium and no surprises to see Raheem Sterling make the team of the week after his hat-trick secured a score of 9.53.

However, strike partner Wilfried Bony earned himself a perfect 10/10 thanks to a double during the rout on Saturday and he joins Sterling in attack.

Arsenal continued their recent resurgence with a fine 3-0 victory over Watford but it was two of their defenders who’ve made the team of the week with Hector Bellerin and Nacho Monreal both making the cut.

Jurgen Klopp kicked off his reign at Liverpool with a hard fought 0-0 draw at Tottenham and goalkeeper Simon Mignolet was the hero as he produced a string of fine saves to keep the North Londoners at bay, and the Belgian makes the team of the week thanks to a score of 7.55.

Perhaps the performance of the week came at St James Park where Georginio Wijnaldum bagged four goals as Newcastle thrashed Norwich 6-2 on Sunday afternoon, so it’s no surprise the Dutchman makes the team.

Check out the full eleven here: 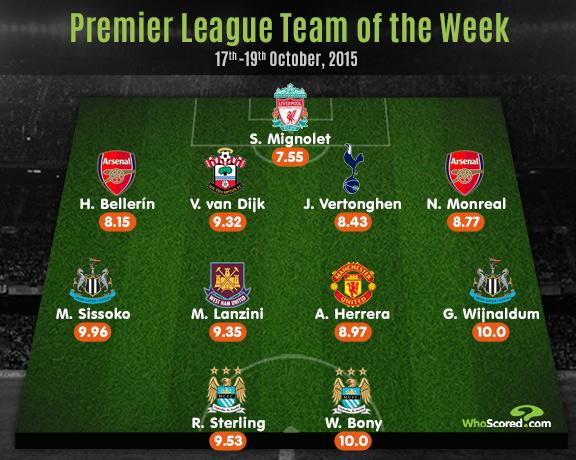