Man Utd will continue their Champions League adventure when they take on CSKA Moscow tomorrow night. Here is the side I think Louis van Gaal will pick:

Man Utd will continue their Champions League adventure when they take on CSKA Moscow in Russia on Wednesday night.  Here is the side I think Louis van Gaal will pick:

Goalkeeper: David de Gea is certain to keep his place in goal with Sergio Romero returning to the bench after missing the win at Everton due to jet-lag.

Defence: van Gaal could make a couple of changes to his back four despite keeping a clean sheet at Goodison Park. Marcos Rojo and Phil Jones have only just returned from injury so they could be given a breather with Sunday’s Manchester derby in mind.

That could see Daley Blind come back in to the side while Antonio Valencia may start at right-back with Matteo Darmian moving to the left side of defence. Paddy McNair and Luke Shaw remain on the sidelines.

Midfield: Morgan Schneiderlin was excellent last time out so he should retain his place while Bastian Schweinsteiger could be rested with Michael Carrick coming back in to the starting eleven.

Ander Herrera was outstanding against Everton so I don’t see how van Gaal can leave him out. Therefore, I expect the Spaniard to start just in front of Carrick and Schneiderlin.

Attack: Memphis Depay has saved his best form for Europe so far in United colours so I wouldn’t be surprised if he was recalled to the side with Anthony Martial given a well-earned rest.

Wayne Rooney could then lead the line up front and look to build on his goal against the Toffees with Juan Mata once again starting on the right wing. 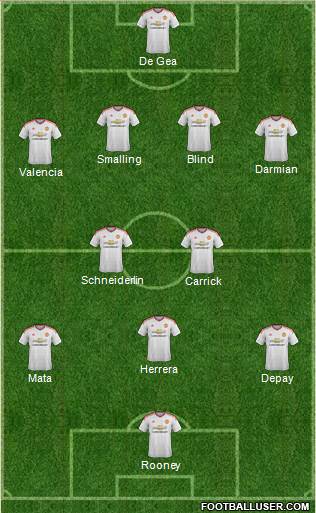