Tottenham will take on Anderlecht in the Europa League on Thursday night. Here is team news and the side we think Mauricio Pochettino will select.

Tottenham Hotspur will look to cement their position at the top of Group J when they take on Anderlecht in the Europa League on Thursday night.

Ahead of the game, Mauticio Pochettino has been speaking to the media at his pre-match press conference and has given Sky Sports News a team news and injury update.

The Spurs boss confirmed that he may opt to rest striker Harry Kane after he picked up a minor knock during the 0-0 draw with Liverpool on Saturday afternoon.

The injury is not thought to be serious and Kane has travelled to Belgium but Pochettino is expected to protect the striker tomorrow and start Clinton N’Jie in attack.

Midfielder Ryan Mason is back in the squad after recovering from a knee injury but he’s unlikely to start the match so he’ll hope to get some minutes under his belt as a substitute.

Eric Dier returns to the squad after serving his domestic suspension having collected five yellow cards this season and he should be restored to the side in midfield.  Moussa Dembele played well against Liverpool last time out so we could see Deli Alli given a rest.

Nacer Chadli has been ruled out for up to six weeks with an ankle ligament injury so Andros Townsend is set for a run in the starting eleven while Kevin Trippier and Ben Davies could also get recalls tomorrow night.

However, Spurs will continue to be without the injured Nabil Bentaleb, Heung-Min Son and Tom Carroll for the clash with Anderlecht – although the trio are close to making their comebacks – while Alex Pritchard remains on the sidelines for the foreseeable future.

“Mason is in the squad for tomorrow and maybe Sunday.

“Maybe he will not play many minutes but he is with us. Nabil Bentaleb is not in the squad but he is close, and so is Sonny and Tom Carroll. Pritchard is different.”

“Njie and Kane (are) today available. We need to assess because at the end of the game against Liverpool, Harry had a small problem. He had a knock, not an injury.

“It is possible he will start on the bench, as normal we need to manage in a good way and assess and analyse every little detail. The player always wants to play. Afterwards I decide if the player is wrong.”

“It is very disappointing for us and the player and we hope that it goes well and maybe in six weeks Chadli will come back,”

“But it is always a place for another player to have an opportunity, maybe Clinton N’Jie or Andros Townsend, to break in. We have a strong squad, they are young, but they are ready to compete.”

Spurs head in to the game sitting top of their group after picking up four points from their opening two games so Pochettino will be looking to cement their position with another victory tomorrow night.

Here is the side we think he will select for the game: 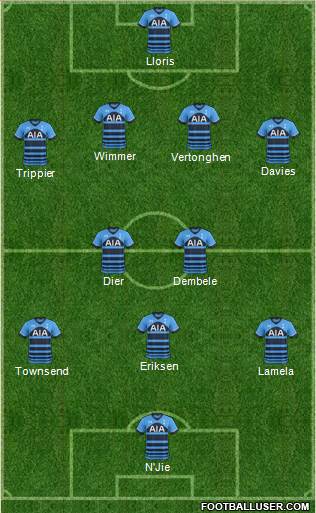