Liverpool take on Rubin Kazan in the Europa League tonight. Here’s a preview with team news, likely line-up, betting and predicted score for the game.

Jurgen Klopp takes charge of his first game at Anfield as Liverpool manager when the Reds take on Rubin Kazan in the Europa League tonight.

The German coach oversaw his first match since replacing Brendan Rodgers earlier this month with a 0-0 draw at Tottenham on Saturday but the former Borussia Dortmund boss is now looking forward to experiencing the atmosphere at Anfield.

Klopp will be hoping to get Liverpool’s Europa League campaign up-and-running as they’ve collected just two points so far having drawn their first two matches with Bordeaux and FC Sion.

The Merseysiders are heavy favourites to collect all three points tonight as Kazan head in to the game following a poor start to the season which sees them sit bottom of Group B and just two points outside the relegation zone in the Russian Premier League after losing eight of their 12 games so far.

Liverpool have been handed a triple injury boost with the news that Christian Benteke, Roberto Firmino and Dejan Lovren could all return to the squad after recovering from injury.

Benteke has been out with a hamstring injury, Firmino has had a back problem while Lovren picked up an ankle injury while on international duty but they are all now back in full training. However, Klopp confirmed they aren’t yet fit to start so the trio are likely to be among the substitutes tonight.

Daniel Sturridge will not be risked due to a niggling knee injury but he hopes to be back in contention against Southampton on Sunday.

Klopp is expected to name a strong side but he could take the opportunity to rest a couple of key men with Lucas Leiva and Philippe Coutinho among those who could be given a breather.

Jordan Henderson, Jon Flanagan and Jordan Rossiter are all still sidelined while Danny Ings and Joe Gomez are unlikely to play again this season after undergoing knee surgery. 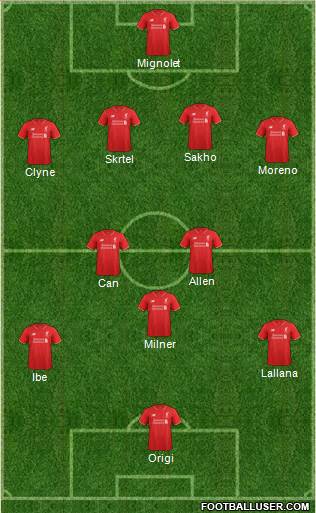 Liverpool 2-0 Rubin Kazan: I’m expecting Liverpool to be up for this one as it’s Klopp’s first home game and while it may take a while for the players to get used to his methods, I still think they’ll ease to victory this evening.

Liverpool are the 4/9 favourites but Football-Talk can get new customers enhanced odds of 4/1 on a home win – just click here to take advantage. My prediction of 2-0 is available at odds of 5/1, while I also like the look of Adam Lallana to open the scoring at odds of 13/2. If we combine those two bets in a score-cast, then we get very tempting odds of 20/1.