Arsene Wenger has confirmed a double injury blow ahead of Arsenal’s clash with Everton and he’s also offered an update on Wilshere and Welbeck. 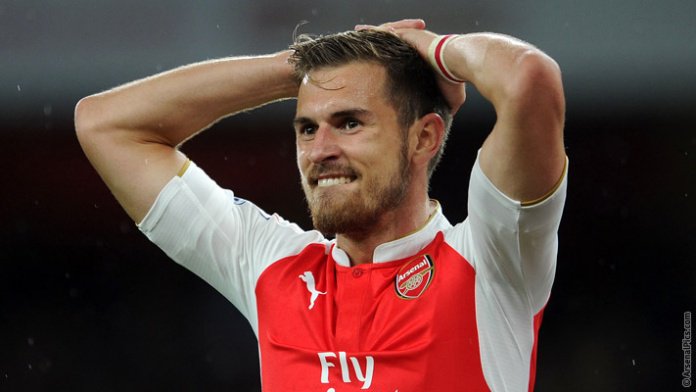 Arsenal are back in Premier League action when they entertain Everton at the Emirates on Saturday evening and Arsene Wenger has given Arsenal.com a team news and injury update ahead of the game.

Unfortunately, the Gunners boss has confirmed that Aaron Ramsey has been ruled out for around a month after suffering a hamstring injury on Tuesday night.

The midfielder picked up the problem during the early stages of our 2-0 win over Bayern Munich and after undergoing a scan today, Arsene has now revealed that Ramsey will be out until after the upcoming international break.

It means the 24-year-old will miss our next five games against Everton, Sheffield Wednesday, Swansea, Bayern Munich and Tottenham before hopefully returning for the trip to West Brom on November 21.

In what is a double injury blow, Arsene confirmed that David Opsina has also been ruled out for the next month. The goalkeeper sustained a shoulder injury while away with the Colombia squad earlier this month and has missed our last two games.

There were hopes he could return this weekend but it appears the injury is worse than first feared as Ospina is now set for a spell on the sidelines and won’t return before after the next international break.

Wenger also gave a brief update on the recovery of Jack Wilshere, Danny Welbeck and Tomas Rosicky with the trio all on course to return from their long-term injuries in the New Year.

David Ospina is out for our next game and certainly until the next international break.

on Wilshere, Rosicky and Welbeck…

For them, you can say around the New Year.

It’s a major blow for Ramsey to be ruled out for the next month but it opens the door for Alex Oxlade-Chamberlain and it’s time for him to step-up and show he’s capable of cementing a first team place.

He could get his first opportunity against Everton this weekend when a win would take us top of the Premier League ahead of the Manchester derby on Sunday.