Chelsea will look to climb up the Premier League table when they take on West Ham on Saturday afternoon. Here is the side I think Jose Mourinho will pick:

Chelsea will look to climb up the Premier League table when they take on West Ham at Upton Park on Saturday afternoon. Here is the side I think Jose Mourinho will pick:

Defence: Mourinho could decide to recall Baba Rahman to the starting eleven with Kurt Zouma the man most likely to make way. This would see Cesar Azpilicueta revert to right-back as Branislav Ivanovic is expected to remain sidelined with a hamstring injury.

Gary Cahill and John Terry put in strong performances during the 0-0 draw at Dynamo Kiev on Tuesday night so should keep their places at the back.

Midfield: The Chelsea boss praised the contribution of Nemanja Matic and Ramires in the centre of midfield in midweek so I wouldn’t be surprised if the duo kept their places this weekend. Ruben Loftus-Cheek didn’t even make the bench last time out after Mourinho criticised his performance against Aston Villa so it will be interesting to see if he features on Saturday.

Attack: Eden Hazard was recalled on Tuesday and put in a lively performance so I’d expect the Belgian to retain his place against West Ham while Cesc Fabregas could play in a more advanced role if Ramires keeps his place in midfield.

Pedro missed the trip to Ukraine with a minor knock but he should return to the squad and could come in for Willian with the Brazilian international given a well-earned rest. Diego Costa should continue to lead the line up front. 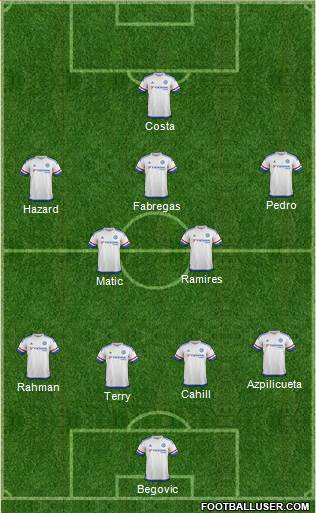