Chelsea will look get their season back on track when they take on Stoke in the Capital One Cup tonight. Here’s a preview with team news, line-up and more

Chelsea will look get their season back on track when they take on Stoke City at the Britannia Stadium in the Capital One Cup tonight.

It’s been another turbulent week for Jose Mourinho with the Blues boss sent to the stands and subsequently charged by the FA after confronting referee Jon Moss at half-time during Saturday’s 2-1 defeat at West Ham.

The loss means Chelsea have won just one of their last six games since beating Walsall in the third round last month so Mourinho desperately needs a win to ease the mounting pressure on his shoulders.

However, the League Cup holders know they are in for a tough game at the Britannia this evening and Stoke have an excellent record in this competition against Chelsea having won all four of their previous meetings.

Chelsea will be without Nemanja Matic after he was sent off at Upton Park so John Obi Mikel should come back in to the starting eleven tonight.

The Nigerian could be joined by youngster Ruben Loftus-Cheek in midfield while Brazilian forward Kenedy could also get a rare start in attack.

Mourinho could hand a competitive debut to third-choice goalkeeper Marco Amelia if he wants to protect Asmir Begovic while Tibaut Courtois remains on the sidelines.

Loic Remy and Pedro are expected to once again miss out through injury so they join Branislav Ivanovic in the treatment room.

Cesc Fabregas, Eden Hazard, Willian and Diego Costa are among those who get be rested tonight.

As for Stoke, they welcome back skipper Ryan Shawcross after he recovered from back surgery while striker Mame Biram Diouf is also poised to make his first team comeback after being granted compassionate leave.

However, Bojan Krkic is a major doubt with a toe injury while Marc Muniesa, Geoff Cameron and Erik Pieters [suspension] are all out. 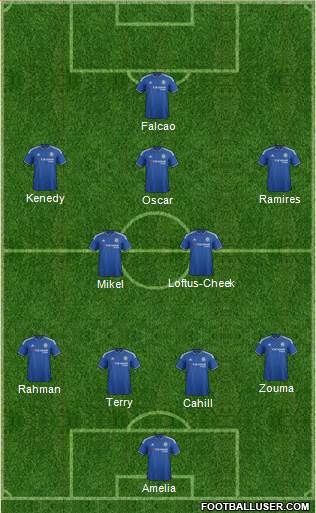 Stoke 1-2 Chelsea A.E.T: The Blues are is a mess and the pressure is on Mourinho to get his side going again. Away to Stoke is not the ideal game but I have a sneaky feeling Chelsea are going to edge this one, although they may be forced in to extra time to get the victory.

Chelsea are the narrow 3/1  favourites but Football-Talk can get you enhanced odds of 5/1 on a Blues win if you click here. My prediction of 2-1 is on offer at odds of 15/2 and I also like the look of Ramires opening the score at 12/1. If we combine those two bets in a score-cast, then we get very tempting odds of 50/1.