Arsenal crashed out of the Capital One Cup following an embarrassing 3-0 defeat to Sheffield Wednesday on Tuesday. Here are Gooner Mac’s ratings from the game: 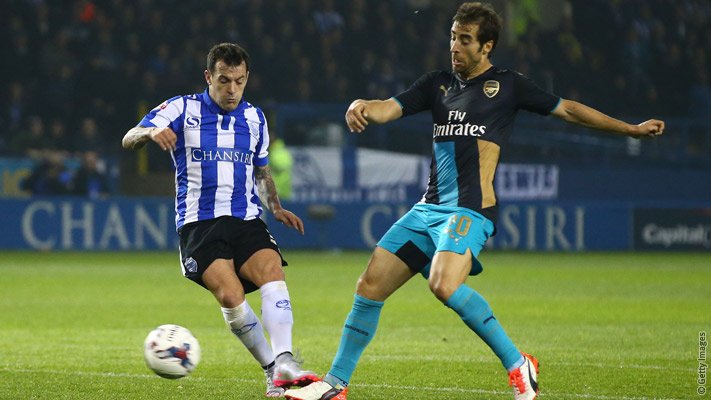 Arsenal crashed out of the Capital One Cup following an embarrassing 3-0 defeat to Sheffield Wednesday on Tuesday night. Here are Gooner Mac’s ratings from the game:

Cech 5/10 | Offered absolutely no protection by his defence. Could do little about the goals.

Debuchy 3/10 | Caught out of position numerous times including for the vital opening goal.

Gibbs 4/10 | Let Wallace stroll past him to score the first goal and left his space wide open for the third. Another poor showing.

Mertesacker 4/10 | Showed very little in terms of leadership and marshalled a defence that conceded three to a Championship side.

Chambers 4/10 | Beaten in the air for the second goal and was given a tough time by the Wednesday attack.

Flamini 3/10 | All over the place. Gifted possession away on several occasions and was badly at fault for the opener.

Kamara 4/10 | Given no guidance by those around him and was left completely exposed. Felt sorry for the lad.

Iwobi 5/10 | Showed flashes of his ability when he got on the ball but very little to work with.

Oxlade-Chamberlain N/A | Off inside two minutes with another injury.

Campbell 5/10 | Showed some neat footwork at times and was at least trying to create things, but his execution was way off.

Giroud 3/10 | Absolutely no desire to be on the pitch. He was clearly more concerned about getting through the match injury-free than trying to win the game.

Walcott N/A | Forced off within 15 minutes of coming on due to a calf problem. Hopefully it’s not serious.

Bennacer 4/10 | Lively in patches but looked out of his depth at this level.

Bielik 6/10 | Fairly impressive cameo from the midfielder. Should probably have started ahead of Kamara.

It was a disastrous night all round for Arsenal as not only did we go out of the cup in embarrassing fashion but it also looks like we’ve lost two important players to injury.

Swansea away up next, if we can find eleven fit players to take to Wales….