Manchester United will look to get back to winning ways when they take on Crystal Palace at Selhurst Park on Saturday afternoon.

The Red Devils crashed out of the Capital One Cup on penalties after being held to a 0-0 draw by Championship side Middlesbrough at Old Trafford in midweek.

That followed last Sunday’s drab 0-0 draw with Manchester City – which left them fourth in the table and two points off top spot – so Louis van Gaal will be keen to get back on track with a win in the capital this weekend.

However, that won’t be easy as Palace are a tough nut to crack these days under Alan Pardew – especially at home – and the Eagles have enjoyed a positive start to the season, despite losing their last three games in all competitions.

United will be without James Wilson and Memphis Depay after the duo picked up knocks in the League Cup on Wednesday night while Antonio Valencia remains out with a foot injury.

van Gaal is expected to recall a number of players to the starting eleven with David De Gea, Wayne Rooney, Anthony Martial, Bastian Schweinsteiger and Juan Mata among those who were rested in midweek.

Ashley Young is back in contention after making a successful return to action against ‘Boro but Paddy McNair and Luke Shaw remain on the sidelines with long-term injuries.

Full-back Pape Souare is a doubt due to a lack of match fitness while Joel Ward will also be assessed just before the game, but strikers Marouane Chamakh and Connor Wickham remain out. 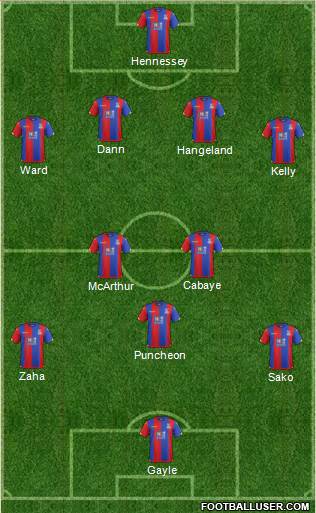 Crystal Palace 1-2 Man Utd: United have been inconsistent of late and the likes of Rooney and Mata really need to step up their game. However, the Red Devils have an excellent record against Palace having never lost a Premier League fixture to the Londoners and I think they might just edge this one.

United are the narrow 21/20 favourites to win the game but Football-Talk can get you enhanced odds of 6/1 on an away victory – just click here to take advantage. My predicted score of 2-1 is on offer at odds of 17/2 while I also like the look of Anthony Martial opening the score at 9/2. If we combine those two bets in a score-cast, then we get very tempting odds of 25/1.