Arsenal have been dealt a major injury blow with the news that Theo Walcott is set to miss at least six games due to a calf injury, according to the Telegraph. 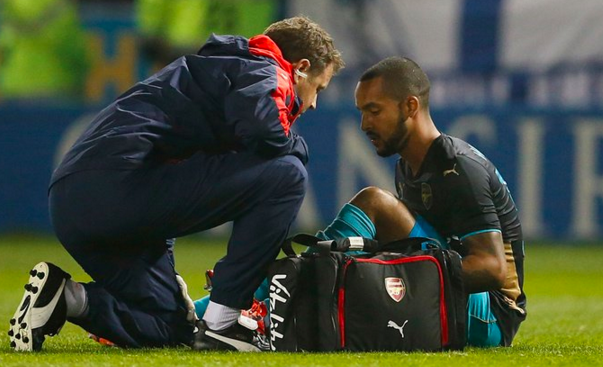 Arsenal have been dealt a major injury blow with the news that Theo Walcott is set to miss at least six games due to a calf injury, according to the Telegraph.

Walcott came on to replace the injured Alex Oxlade-Chamberlain early on during our Capital One Cup clash at Sheffield Wednesday on Tuesday night but last just 15 minutes after pulling up with a calf problem.

Arsene Wenger initially indicated that both players were facing around three weeks on the sidelines before revealing at his pre-match press conference on Friday that Walcott’s injury was in fact worse than first thought.

The boss confirmed that Theo would be out for longer than Oxlade-Chamberlain but refused to give any firm comeback date, while he also revealed that the attacker’s calf injury came about as a result of an initial ankle problem.

“The gut feeling is one (Oxlade-Chamberlain) will be 20 days and one will be longer,” Wenger is quoted as saying by the Telegraph

“Walcott thinks he got a kick on his ankle and he felt it displaced a little. Then, your calf doesn’t work in the right position, then you can get an injury because it extends a little bit too much in a different position. You cannot plan everything. Players have to be robust.”

However, the Telegraph claim that Walcott is expected to be on the sidelines for five weeks meaning he’ll miss at least six games in total for Arsenal, as well as missing the upcoming England friendlies against Spain and France.

The 26-year-old is now certain to sit out our games with Swansea, Bayern Munich, Tottenham, West Brom, Dinamo Zagreb and Norwich while he’ll be in a race against time to be fit for the visit of Sunderland to the Emirates on December 5th.

The news will come as a huge blow to Arsene Wenger as our injury list is growing just as we started to find some real form and put ourselves in an excellent position to mount a serious title challenge.

Oxlade-Chamberlain, Aaron Ramsey, Mikel Arteta and David Ospina should be back after the international break but the likes of  Danny Welbeck, Jack Wilshere and Tomas Rosicky won’t return until the New Year.

It leaves us with just Olivier Giroud as a main striker to choose from while Wenger has a void to fill on the right-wing over the next three games. Joel Campbell seems the most likely solution so hopefully the Costa Rican can take his chance, starting against Swansea this afternoon.