Arsenal take on Bayern Munich at the Allianz Arena this evening looking for a repeat of last month’s stunning victory over the German giants in the Champions League.

We beat Pep Guardiola’s side 2-0 at the Emirates two weeks ago to keep our hopes of qualifying from Group F alive but we need another positive result tonight to give those chances a further boost.

Despite the impressive win a fortnight ago, we still sit bottom of the table but with just three points separating us from joint leaders Bayern and Olympiakos, it’s still all to play for.

We head into the game in superb form in the Premier League with Saturday’s 3-0 win at Swansea making it five wins on the bounce to move us level on points with leaders Manchester City, so the boys should be in buoyant mood.

We face a formidable outfit this evening but it’s worth remembering that we’ve taken four points away from the Allianz on our last two visits, so we are more than capable of getting a result.

However, the squad will be very different tonight from the one that started against Bayern two weeks ago. Aaron Ramsey is still out after picking up a hamstring during that game and he was joined on the sidelines by Theo Walcott and Alex Oxlade-Chamberlain after they both picked up injuries last week.

To compound our misery Hector Bellerin hasn’t travelled to Munich after suffering a groin problem so Mathieu Debuchy is set to start at right-back.

Danny Welbeck, Tomas Rosicky, Mikel Arteta, Jack Wilshere and David Ospina are all still unavailable so youngster Jeff Reine-Adelaide has been included in the squad.

On the other hand, Bayern’s injury worries have eased over the past two weeks with Arjen Robben, Medhi Benatia and Javi Martinez all back in contention, but Franck Ribery, Mario Gotze and Sebastian Rode remain unavailable. 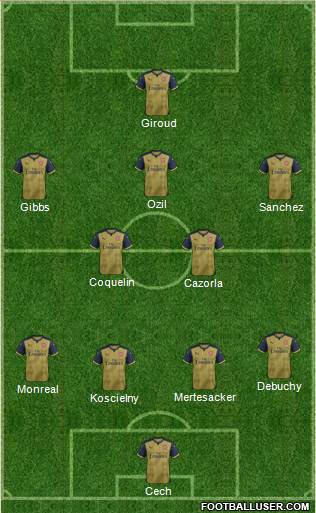 Bayern Munich 2-1 Arsenal: I expect us to sit back, soak up the pressure and hit Bayern on the counter-attack just as we did at the Emirates. However, I doubt we’ll be able to keep them at bay this time around. Hopefully we can give them a good game, but unfortunately I think our injury-hit squad will slip to a 2-1 loss tonight.

Bayern are the 4/9 favourites to win with the bookmakers but Football-Talk can get you crazy odds of 4/1 on a home win if you click here. For those optimistic Gooners, we can also get you 12/1 on an Arsenal win. My prediction of 2-1 is on offer at odds of 15/2 while I also like the look of Tomas Muller opening the score at 7/2. If we combine those two bets in a score-cast, then we get very tempting odds of 18/1.