Liverpool will look to take a huge step towards qualification in the Europa League when they play Rubin Kazan. Here is the side I think Jurgen Klopp will pick:

Liverpool will look to take a huge step towards qualification from the group stages in the Europa League when they play Rubin Kazan tomorrow night. Here is the side I think the German will pick:

Defence: Klopp is likely to pick a strong squad which could see him stick with the same back four that started during the 3-1 win at Chelsea on Saturday. That would see Martin Skrtel and Mamadou Sakho start in the middle of defence while Nathaniel Clyne and Alberto Moreno retaining their places in the full-back slots.

Midfield: There could be a change in midfield with Joe Allen coming in for Lucas Leiva to give the Brazilian a breather ahead of the Crystal Palace game this Sunday. Emre Can should retain his place in the middle of the park. Jordan Henderson remains out through injury.

Attack: James Milner should play from the right wing while Philippe Coutinho has travelled and is expected to start in the No.10 role. Adam Lallana may get a breather with Jordon Ibe coming in to the attack.

Daniel Sturridge remains on the sidelines and with Roberto Firmino likely to be rested, Christian Benteke should lead the line up front. 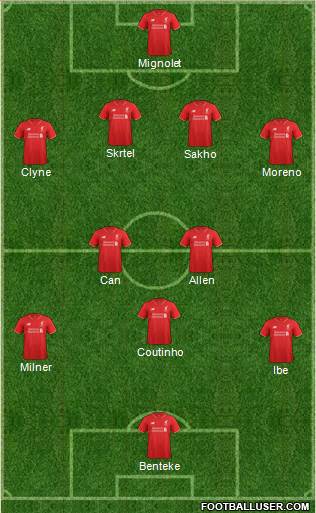