Chelsea will look get their season back on track when they take on Stoke at the Britannia Stadium on Saturday. Here is the side I think Jose Mourinho will pick:

Chelsea will look get their season back on track when they take on Stoke at the Britannia Stadium on Saturday afternoon. Here is the side I think Jose Mourinho will pick:

Defence: Mourinho could make changes at the back to cope with the physical threat that Stoke still pose and this could see Gary Cahill come back in to partner John Terry in the middle of defence after being left on the bench last night.

Kurt Zouma could then move to right-back with Cesar Azpilicueta switching to the left side of the back four. Baba Rahman would be the man to drop out. It remains to be seen whether Branislav Ivanovic will be fit to return after over a month out with a hamstring injury.

Midfield: Nemanja Matic returned to the starting eleven for Wednesday’s 2-1 win over Dynamo Kiev and he’s expected to keep his place alongside Ramires this weekend.

Attack: Cesc Fabregas was also back in the team in midweek after being left out versus Liverpool last weekend and I expect the Spaniard to continue in the free role with Willian almost certain to keep his place in attack after a superb display against Kiev.

Eden Hazard was surprisingly left out on Wednesday night so I’d expect the Belgian to get a recall on Saturday while Diego Costa should continue to lead the line up front. 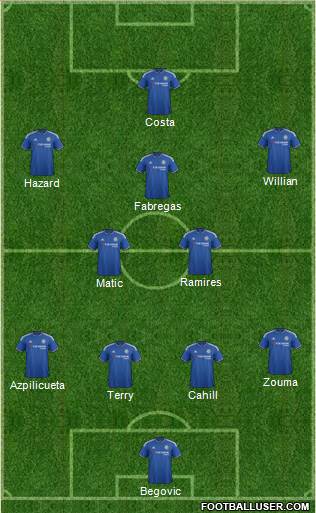