Liverpool will look to continue their recent good form when they take on Crystal Palace at Anfield on Sunday. Here is the side I think Jurgen Klopp will pick:

Liverpool will look to continue their recent good form when they take on Crystal Palace at Anfield on Sunday afternoon. Here is the side I think the German will pick:

Defence: Klopp is expected to recall Martin Skrtel after resting the centre-back for last night’s 1-0 victory at Rubin Kazan. Dejan Lovren will be the man to drop to the bench with Mamadou Sakho keeping his place at the back along with Nathaniel Clyne and Alberto Moreno.

Midfield: Lucas Leiva is also set for a recall alongside Emre Can in midfield after being given a breather in the Europa League with Joe Allen likely to drop to the substitutes bench. Jordan Henderson remains out through injury.

Attack: James Milner should play from the right wing again while Philippe Coutinho is expected to start despite carrying a minor hamstring problem. Adam Lallana is also likely to come back in to the side with Jordon Ibe unfortunate to drop out after getting on the score-sheet last night.

Daniel Sturridge remains on the sidelines so Christian Benteke should lead the line up front. 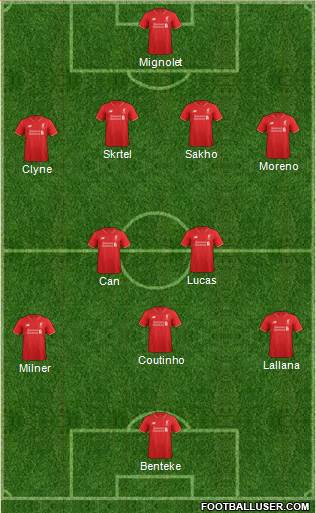