Man City will look to cement their place at the top of the table when they take on Liverpool on Saturday. Here is our predicted team for the game:

Manchester City will look to cement their place at the top of the Premier League when they take on Liverpool at the Etihad Stadium on Saturday.  Here is the starting eleven I think Manuel Pellegrini will go with for the game:

Goalkeeper: Number 1 Joe Hart is set to keep his place between the sticks this weekend.

Defence: Pellegrini is expected to make one change to his defence after Pablo Zabaleta returned to full training this week having recovered from a knee injury which he picked up while on international duty last month.

The Argentinean international could replace Bacary Sagna at right-back and start alongside Vincent Kompany, Nicolas Otamendi and Alexander Kolarov in the back four.

Midfield: Fabian Delph could be back in contention after recovering from a muscle injury but I think we’ll see Pellegrini stick with Fernandinho and Yaya Toure as his preferred midfield pairing against Liverpool.

Attack: David Silva is also back in full training after being sidelined with a foot injury and the Spaniard could make his return to the first team and start in attack alongside Raheem Sterling and Kevin De Bruyne.

In a further boost, the Citizens have star striker Sergio Aguero available again after he recovered from a hamstring strain. The Argentine could therefore replace Wilfried Bony up front if Pellegrini thinks he’s fit enough to start.

However, Samir Nasri is set for a prolonged spell on the sidelines after suffering a hamstring injury this week. 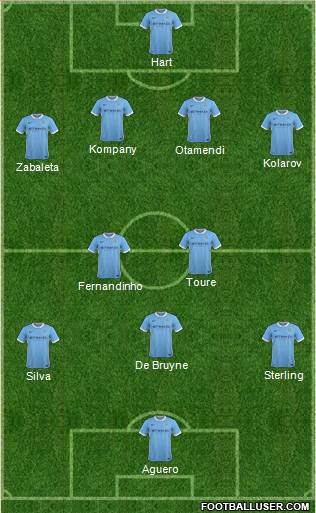