Man Utd will look to move top of the table when they take on Watford at Vicarage Road on Saturday. Here’s the side I think Louis van Gaal will pick:

Man Utd will look to move top of the Premier League table when they take on Watford at Vicarage Road on Saturday lunchtime.  Here is the side I think Louis van Gaal will pick:

Defence: van Gaal is likely to make a couple of changes to his back four with Phil Jones coming in for Daley Blind to start alongside Chris Smalling – who should recover from a minor knock. Matteo Darmian could return at right-back with Ashley Young dropping out while Marcos Rojo should keep his place at left-back.

Midfield: Morgan Schneiderlin is expected to return to the midfield after missing the win over West Brom before the international break through illness. Bastian Schweinsteiger is the man most likely to partner the Frenchman with Michael Carrick ruled out after picking up an injury while away with England.

Ander Herrera could get a recall to the starting eleven with the Spaniard deployed in an attacking midfield role behind the striker.

Attack: Anthony Martial is a major doubt for the game after picking up a foot injury during France’s loss to England on Tuesday night. If the forward is ruled out then Wayne Rooney could be restored as the central striker. Juan Mata should once again start on the right and Jesse Lingard should keep his place after a Man of the Match performance last time out. 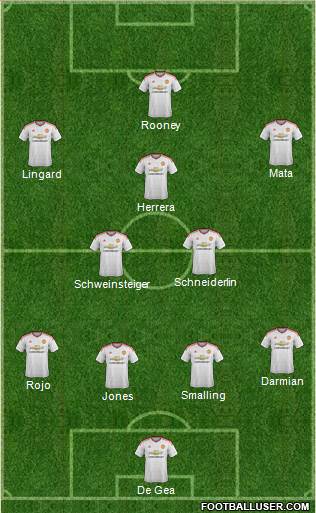