Arsenal will look to keep their Champions League qualification hopes alive when they take on Dinamo Zagreb at the Emirates tomorrow. Here is our predicted team:

Arsenal will look to keep their Champions League qualification hopes alive when they take on Dinamo Zagreb at the Emirates tomorrow night. Here is the side Gooner Mac thinks Arsene Wenger will select for the game:

Defence: We have no fresh injury concerns at the back but I think the boss might be tempted to rest Laurent Koscielny for the game with Gabriel coming in to start alongside Per Mertesacker.

Hector Bellerin showed no ill-effects after returning against West Brom on Saturday so he should keep his place at right-back with Nacho Monreal once again starting on the left side of defence.

Midfield: The big news is that Francis Coquelin is out for the foreseeable future after damaging knee ligaments at the weekend so we have a real problem in midfield. Mikel Arteta would usually come in but the Spaniard is also out after picking up a calf injury so Mathieu Flamini is expected to start alongside Santi Cazorla.

Attack:  Aaron Ramsey is back in contention after returning to full training today but the Welshman is unlikely to be risked from the start so Joel Campbell could come back in to to start with Mesut Ozil in attack.

Ideally we’d rest Alexis Sanchez soon but with Alex Oxlade-Chamberlain, Theo Walcott and Danny Welbeck still out we have limited options so the Chilean international will have to continue on the left wing tomorrow night.

With no other viable striking options available in the squad, Olivier Giroud will continue to lead the line up front. 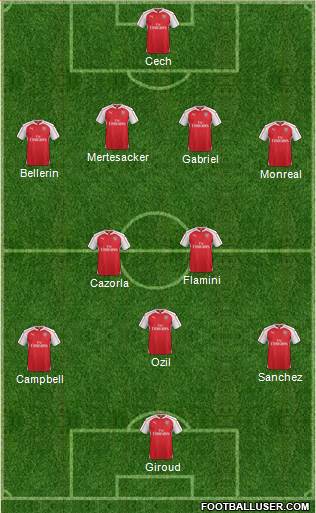