Chelsea will look secure qualification from the group stages of the Champions League when they take on Maccabi Tel Aviv tonight.

The Blues head into the game sitting second in Group G – two points clear of third-placed Dynamo Kiev – after beating the Ukrainian’s 2-1 at Stamford Bridge three weeks ago.

Therefore, the Premier League champions can ensure safe passage to the last 16 if they collect all three points tonight and Kiev fail to beat FC Porto, while a draw would be enough for Jose Mourinho’s men if Kiev lose in Portugal.

Chelsea are the heavy favourites as Maccabi sit rock bottom of the group having lost all four of their games so far and lost the reverse fixture 4-0 in West London back in September.

Mourinho’s men have endured a disastrous season so far but got back to winning ways in the Premier League with victory over Norwich at the weekend so the Portuguese coach will be hoping to build on that win tonight.

Chelsea have no fresh injury worries to deal with so Mourinho will only be without two of his senior squad members.

Thibaut Courtois has stepped-up his rehabilitation following knee surgery and is back in light training but the Belgian international is still a few weeks away from making his first team return, so Asmir Begovic will continue in goal.

Colombian hitman Radamel Falcao is also on the sidelines with a muscle injury so Diego Costa is likely to start up front and will be looking to build on his goal against Norwich on Saturday.

Mourinho may chose to make some changes to his side ahead of Sunday’s huge clash with Tottenham meaning the likes of Kurt Zouma, Branislav Ivanovic and Cesc Fabregas could be rested with Baba Rahman, Gary Cahill and Oscar coming in. 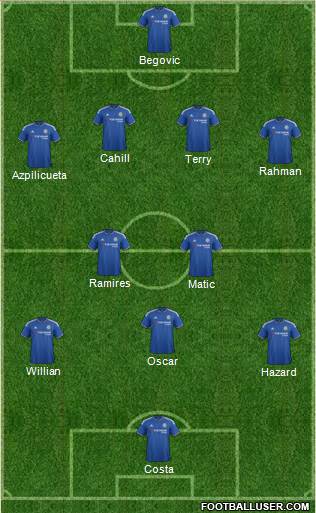 Maccabi Tel Aviv 0-2 Chelsea: Chelsea are yet to find their best form this season but the win over Norwich should give them some confidence and Maccabi are a poor side who shouldn’t pose too many problems for the Premier League champs.

The Blues are the 4/11 favourites to win the game but Football-Talk can get you enhanced odds of 3/1 on an away victory tomorrow if you click here. My prediction of 2-0 is on offer at 11/2 and I also like the look of Willian opening the scoring at odds of 11/2. If you combined those two bets in a score-cast then we get very tempting odds of 20/1.