Arsenal take on Dinamo Zagreb at the Emirates tonight in the Champions League. Here’s a preview with team news, likely line-up, betting and predicted score.

Arsenal will look to keep their Champions League qualification hopes alive when we take on Dinamo Zagreb at the Emirates tonight.

We head into the game sitting third in Group F following our disappointing loss at Bayern Munich three weeks ago and with Olympiakos six points clear in second, we have a mountain to climb if we’re to maintain our record of qualifying for the last 16.

If the Greeks avoid defeat in Munich tonight then our result will be irrelevant. All we can do is beat Zagreb and hope for a favour in Germany to set-up a decider against Olympiakos in a fortnight where we’d need a win by two clear goals to steal second spot.

We find ourselves in this situation after falling to consecutive defeats in our first two group games so we only have ourselves to blame but I still have a feeling we might pull this off as long as Bayern do their job at the Allianz Arena.

However, we’ll have to play a lot better than we did against West Brom on Saturday as we were well below par during the 2-1 defeat at the Hawthorns.

Arsenal have been hit with a major injury blow ahead of the game with Francis Coquelin ruled out for at least two months with a knee injury that he picked up on Saturday.

Mikel Arteta is also on the sidelines with a calf problem so Mathieu Flamini is expected to start alongside Santi Cazorla in midfield tonight.

Aaron Ramsey is back in contention after returning to training following a hamstring injury but I doubt the Welshman will start just yet meaning Joel Campbell could start on the right.

Alex Oxlade-Chamberlain is still nursing a hamstring strain so he’ll remain on the sidelines along with Theo Walcott, Jack Wilshere, Danny Welbeck and Tomas Rosicky. 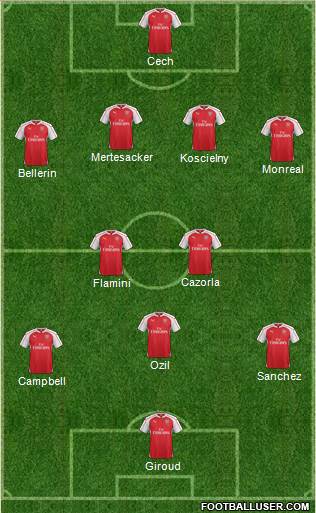 Arsenal 3-0 Dinamo Zagreb: We have a squad decimated by injuries and we looked toothless in attack on Saturday, but I still think we’ll have more than enough quality to see-off Zagreb at home tonight. We’ll have to wait and see what happens in Germany as to whether that will be enough to keep our qualification hopes alive.

Arsenal are the heavy 1/5 favourites to win with the bookmakers but Football-Talk can get you crazy odds of 3/1 on a Gunners victory – just click here to take advantage. My prediction of 3-0 is on offer at odds of 7/1 while I also like the look of Olivier Giroud to score the only goal of the game at 14/5. If we combine those two bets in a score-cast, then we get very tempting odds of 14/1.