Man Utd will look to progress to the last 16 of the Champions League when they take on PSV Eindhoven on Wednesday. Here is the side I think van Gaal will pick

Man Utd will look to progress to the last 16 of the Champions League when they take on PSV Eindhoven at Old Trafford on Wednesday night.  Here is the side I think Louis van Gaal will pick:

Defence: van Gaal is going to be forced in to at least one change at the back as Phil Jones has been ruled out after picking up a knock during Saturday’s 2-1 win at Watford. Marcos Rojo is the man likely to come back in with Daley Blind moving into the middle of defence alongside Chris Smalling.

Ashley Young has been chosen ahead of Matteo Darmian at right-back in recent weeks and that could continue tomorrow.

Midfield: Michael Carrick is out of the game with a foot injury that he suffered while away on international duty with England so Morgan Schneiderlin is expected continue alongside Bastian Schweinsteiger in midfield.

Attack: United have been handed a major double boost with Anthony Martial and Wayne Rooney back in contention after returning to training today. Martial missed the win over Watford with an ankle injury while Rooney was suffering from illness but both are expected to come straight back in to the side tomorrow night.

Ander Herrera has been ruled out with a knock which he picked up at Vicarage Road but Memphis Depay could keep his place after scoring at the weekend and Juan Mata should once again start on the right wing. 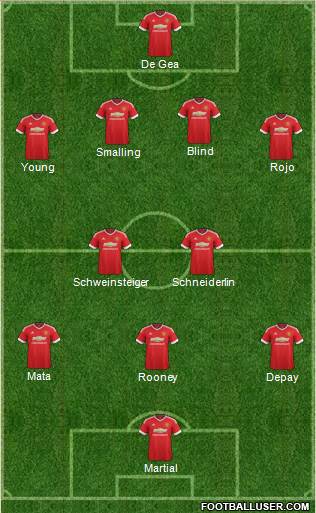