Liverpool will look to continue their good form when they take on Swansea at Anfield on Sunday afternoon. Here is the side I think the Jurgen Klopp will pick:

Liverpool will look to continue their recent good form when they take on Swansea at Anfield on Sunday afternoon. Here is the side I think the Jurgen Klopp will pick:

Goalkeeper: Simon Mignolet is expected to keep his place in goal despite his rookie error during the win over Bordeaux last night.

Defence: Martin Skrtel missed the Europa League win due to illness but is expected to be back in the squad on Sunday afternoon so Kolo Toure is the man most likely to make way.

Mamadou Sakho has been ruled out for at least another month with a knee injury so Dejan Lovren should keep his place in the back four along with Nathaniel Clyne and Alberto Moreno.

Midfield: Lucas Leiva is suspended for the game after collecting five bookings this season so Joe Allen should keep his place in midfield with Emre Can recalled after being given a rest on Thursday night.

Jordan Henderson is pushing for a recall after returning to full training but Klopp is likely to be cautious with his skipper meaning a place on the bench is the best he can probably hope for this weekend.

Attack: Philippe Coutinho is set to come back in to the side after missing the Bordeaux clash with a minor hamstring injury that he suffered against Manchester City while Adam Lallana should also get a recall after being rested last time out.

Daniel Sturridge has picked up a minor foot problem but he could be on the bench this Sunday. Klopp has cast doubt over Christian Benteke’s place in the starting eleven after raising doubts over whether he can play twice in three days so Roberto Firmino could start up front, just as he did against Man City last weekend. 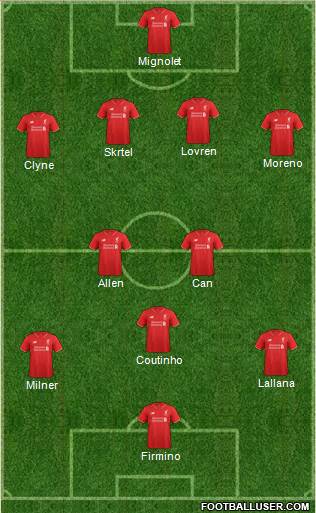