Chelsea will look climb up the Premier League table when they take on Tottenham at White Hart Lane on Sunday. Here is the side I think Jose Mourinho will pick:

Chelsea will look climb up the Premier League table when they take on Tottenham at White Hart Lane on Sunday afternoon. Here is the side I think Jose Mourinho will pick:

Goalkeeper: Thibaut Courtois is back in light training but the Spurs game will come too soon so Asmir Begovic is set to continue between the sticks.

Defence: Mourinho could be forced to make some changes at the back as John Terry is a major doubt for the game after being stretchered off during the win at Maccabi Tel Aviv on Tuesday night. If the skipper is ruled out then Kurt Zouma will start alongside Gary Cahill.

Branislav Ivanovic was rested in midweek so he’s set for a recall with Cesar Azpilicueta moving to the left side of defence.

Midfield: Ramires is also a doubt after suffering a muscle injury while warming up prior to the Tel Aviv game so Cesc Fabregas is likely to continue alongside Nemanja Matic in the centre of the park.

Attack: Willian is in fine form right now so he should keep his place in attack along with Eden Hazard while Pedro Rodriguez is expected to come back in to the side in place of Oscar after being left out on Tuesday night.

Diego Costa should once again lead the line up front and he’ll be looking to build on his goal against Norwich last weekend. Radamel Falcao remains out through injury. 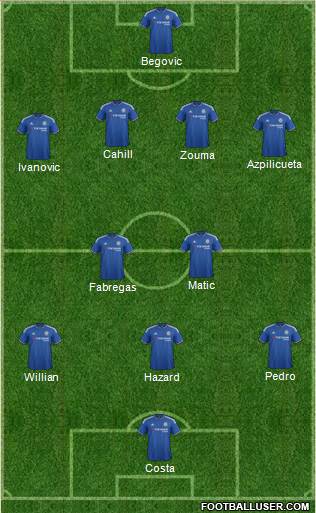