Liverpool will look to continue their good form when they take on Southampton at St Marys tomorrow night. Here is the side I think the Jurgen Klopp will pick:

Liverpool will look to continue their good form when they take on Southampton in the Capital One Cup at St Marys tomorrow night. Here is the side I think the Jurgen Klopp will pick:

Goalkeeper: Simon Mignolet is expected to keep his place in goal with Adam Bogdan his back-up on the bench.

Defence: Martin Skrtel made a successful return to the starting eleven on Sunday after missing the Europa League win due to illness so he should continue at the back tomorrow.

Klopp has indicated he’ll field a strong side for the game so I expect Nathaniel Clyne and Alberto Moreno to continue in the full back slots while Dejan Lovren should continue to fill in for Mamadou Sakho – who has been ruled out for at least another month with a knee injury.

Midfield: Lucas Leiva missed the win over Swansea through suspension so he should return to the starting eleven and he could be joined by Joe Allen in midfield with Emre Can given a well earned rest.

Jordan Henderson made his return with a cameo appearance against Swansea but Klopp has confirmed he’ll resist the temptation to start his skipper so the midfielder will continue on the bench.

Attack: Daniel Sturridge also made his long-awaited return off the bench on Sunday but again Klopp has confirmed he won’t start him tomorrow night so the striker will once again be among the subs.

Philippe Coutinho is facing a late fitness test but is expected to be passed fit so the Brazilian could come back in to play in the No.10 role. Christian Benteke has started the last two matches and Klopp has suggested the Belgian may need a breather so Roberto Firmino may play in a false 9 role – much as he did against City.

Adam Lallana and James Milner should keep their places in the eleven. 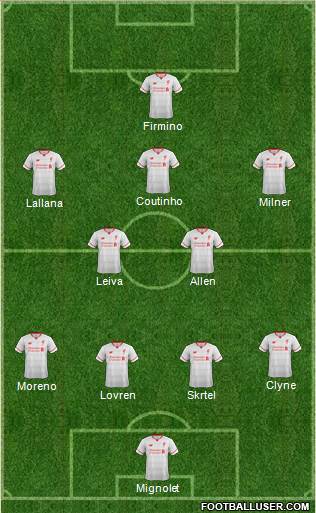