Chelsea will look climb up the Premier League table when they take on Bournemouth at Stamford Bridge. Here is the side I think Jose Mourinho will pick:

Chelsea will look climb up the Premier League table when they take on Bournemouth at Stamford Bridge on Saturday afternoon. Here is the side I think Jose Mourinho will pick:

Goalkeeper: Thibaut Courtois is reportedly set to make his long-awaited return to the starting eleven after four months out with a knee injury. The goalkeeper is back in full training so should replace Asmir Begovic this weekend.

Defence: John Terry remains a major doubt after missing last weeks draw at Tottenham with a foot problem so Kurt Zouma should continue alongside Gary Cahill at the back with Branislav Ivanovic and Cesar Azpilicueta in the full-back slots.

Midfield: Ramires will face a late fitness test on a muscle injury that also ruled him out of the trip to White Hart Lane but I think we’ll see Cesc Fabregas continue alongside Nemanja Matic in the centre of the park.

Attack: Mourinho has suggested that dropping Diego Costa last week may have been a mistake so we could see the temperamental Brazilian back leading the line on Saturday.

Eden Hazard and Willian are expected to retain their places in attack while Mourinho may opt for Pedro ahead of Oscar. Radamel Falcao is set to remain unavailable for selection due to a muscle problem. 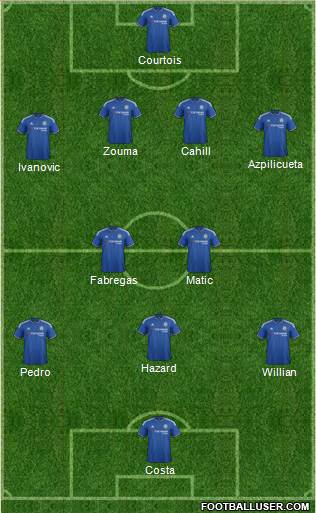