Arsenal Stars Named In Premier League Team of the Week

Arsenal stars Mesut Ozil and Aaron Ramsey have been named in the WhoScored Premier League Team of the Week. See the full team here.

Arsenal stars Mesut Ozil and Aaron Ramsey have been named in the WhoScored Premier League Team of the Week.

The pair were instrumental as the Gunners eased to a 3-1 victory over Sunderland at the Emirates on Saturday afternoon to climb up to second in the Premier League table.

Ozil took his season assist tally to an incredible 12 after setting up Joel Campbell for the opening goal and the German schemer’s impressive overall display earned him a place in the Team of the Week thanks to a score of 8.52.

Ramsey has only recently returned to fitness after over a month out with a hamstring injury but he was back to his best at the weekend as he picked up an assist and a goal to see-off Sunderland, and his score of 8.49 was enough to see him named in the TOTW.

Leicester continued their excellent form with another impressive win at Swansea with Riyad Mahrez the star man having bagged a hat-trick so it’s no surprise to see him make the eleven.

Here is the full WhoScored Team of the Week: 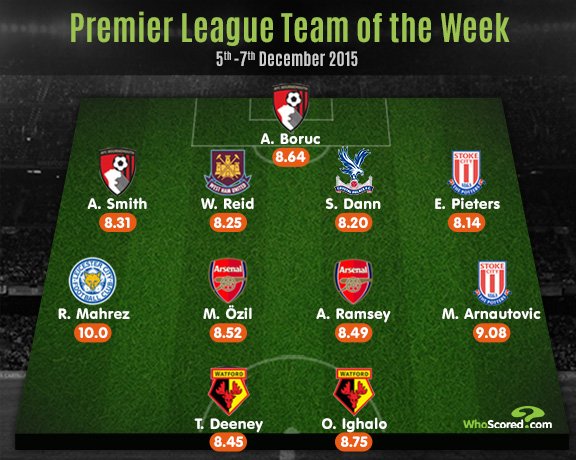