Chelsea will look to qualify for the last 16 of the Champions League when they face Porto at Stamford Bridge. Here is the side I think Jose Mourinho will pick:

Chelsea will look to qualify for the last 16 of the Champions League when they face Porto at Stamford Bridge on Wednesday night. Here is the side I think Jose Mourinho will pick:

Goalkeeper: Thibaut Courtois came through the loss to Bournemouth at the weekend unscathed after making his long-awaited return from a knee injury so he’s expected to keep his place in goal tomorrow.

Defence: John Terry is back in contention after resuming first team training having missed the last two matches with an ankle injury so the skipper should come straight back in to the side with Gary Cahill likely to drop out.

Cesar Azpilicueta is set for a recall after being rested on Saturday so Baba Rahman is expected to drop to the bench with Branislav Ivanovic keeping his place at right back.

Midfield: Ramires is available again after recovering from a muscle injury that ruled him out for three games but I think we’ll see Cesc Fabregas continue alongside Nemanja Matic in the centre of the park so the Brazilian may have to make do with a place among the subs.

Attack: Diego Costa has been benched for the last two matches but I think we could see the Spanish international recalled against Porto. Eden Hazard would therefore drop in to the No.10 role and be supported by Pedro and Willian in attack. 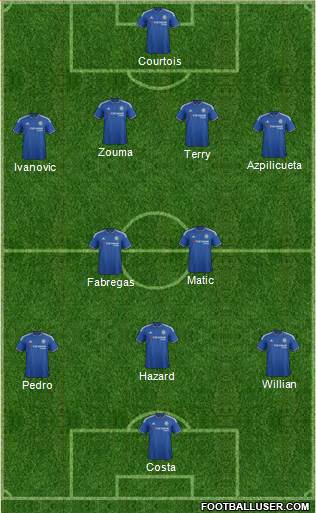