Chelsea will look to secure qualification to the last 16 of the Champions League when they face FC Porto at Stamford Bridge tonight.

The Blues have endured a torrid season so far and it sunk to a new low following Saturday’s 1-0 home defeat to AFC Bournemouth, which leaves then languishing way down in 14th place in the Premier League table.

The pressure is mounting on Jose Mourinho’s shoulders so the Portuguese coach will be desperate to secure qualification to the last 16 of the Champions League to prevent further question marks over his position as manager.

The Blues head into the game sitting joint top of Group G with Porto and know a draw this evening will be good enough to book their place in the draw for the next phase while victory would ensure they qualify as group winners.

However, the visitors need a victory to be sure of qualification as Dynamo Kyiv are just two points adrift in third and have a better head-to-head record so it’s sure to be a nervy night in West London.

Chelsea have been boosted by the return to fitness of John Terry after the skipper missed the last two games with an ankle injury. The defender is likely to come straight back in to the back four with Gary Cahill the man set to drop out.

Ramires is also available again after recovering from a muscle injury that’s seen him miss the last three games and the Brazilian is being tipped to replace Cesc Fabregas in the heart of midfield.

Cesar Azpilicueta should be recalled at left-back while Diego Costa could also be brought back in to the starting eleven after being controversially left out in recent weeks.

Thibaut Courtois made his successful return to the first team at the weekend after over three months out with a knee injury and he’s set to continue in goal tonight. 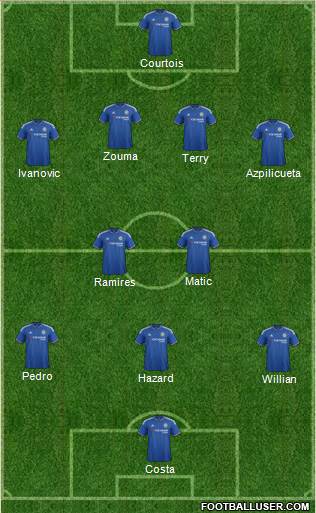 Chelsea 1-1 Porto: Chelsea’s season is in danger of imploding and tonight is a huge game for both the club and Mourinho. I personally don’t see the Blues losing tonight but I think it will be a tense score draw which will be enough to see Chelsea through.

Chelsea are the narrow 21/20 favourites with the bookmakers but Football-Talk can get you enhanced odds of 6/1 on a home win if you click here. My prediction of 1-1 is on offer at 6/1 and I also like the look of Willian to open the scoring at odds of 15/2. If you combined those two bets in a score-cast then we get very tempting odds of 45/1.