Tottenham have been handed a double injury boost ahead of their Europa League clash with AS Monaco, plus we provide our predicted starting eleven.

Tottenham have been handed a double injury boost with the news that Nabil Bentaleb and Nacer Chadli are fit and available to face Monaco tomorrow night.

Bentaleb has been on the sidelines for much of the season with an ankle injury restricting the midfielder to just four appearances so far. However, he’s now finally back in full training and Mauricio Pochettino has confirmed the Algerian is back in contention.

In a double boost, Chadli is also back in the squad for tomorrow night’s game after recovering from an ankle injury that he sustained during the 0-0 draw with Liverpool back in October.

However, it wasn’t all positive news as the Argentinean coach also revealed that Mousa Dembele will miss the game through illness while Ryan Mason remains on the sidelines with an ankle injury.

Pochettino has been speaking to the media at his pre-match press conference this afternoon and he’s quoted as saying by TottenhamHotspur.com:

“It’s very good news [that Bentaleb and Chadli are available]. It makes the team more competitive and pushes everyone. It’s good for us to have everyone fit.

“Mousa is sick with a bad stomach and he’s out. Ryan may be able to train with the squad next week.”

Spurs entertain the Ligue 1 outfit at White Hart Lane on Thursday night safe in the knowledge they are through to the knockout stages of the Europa League so Pochettino could take the opportunity to rest a few key men.

Harry Kane and Christian Eriksen are two players who are in line for a breather as Tottenham look ahead to their Premier League clash with Newcastle on Sunday afternoon.

Chadli and Bentaleb could get starts in order to boost their match fitness while Keiran Trippier, Kevin Wimmer and Ben Davies could all start at the back.

Here is the line-up we think Pochettino will go with: 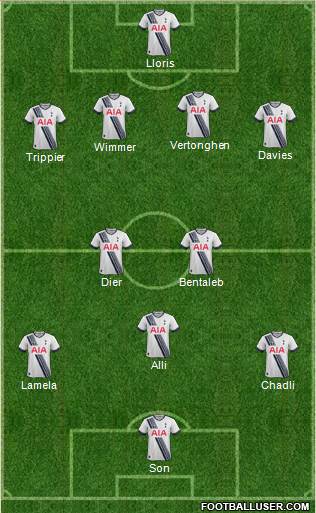