Man Utd will look get over their Champions League heartache when they face Bournemouth at Dean Court on Saturday. Here is the side I think van Gaal will pick:

Man Utd will look get over their Champions League heartache when they face Bournemouth at Dean Court on Saturday evening.  Here is the side I think van Gaal will pick:

Goalkeeper: David de Gea is certain to start between the sticks once again on Saturday night.

Defence: van Gaal has problems in defence as Chris Smalling is a major doubt for the game after suffering a groin injury against Wolfsburg in midweek. If the defender misses out then with Phil Jones also out with a foot problem, Paddy McNair could partner Daley Blind in the centre of defence.

Matteo Darmian is likely to be ruled out this weekend after limping off against Wolfsburg with a hamstring injury so Ashley Young could deputise at right-back with Antonio Valencia on the sidelines.

With Luke Shaw out for the season and Marcos Rojo ruled out after undergoing shoulder surgery earlier this week, youngster Guillermo Varela may continue to fill-in at left-back.

Midfield: Morgan Schneiderlin failed to make the trip to Germany after being forced off against West Ham last Saturday with a hip problem so he remains a major doubt for the Bournemouth clash.

Bastian Schweinsteiger is certain to miss the trip to the South Coast after being slapped with a three-match ban following an incident against West Ham last weekend so Michael Carrick could play alongside Marouane Fellaini on Saturday.

Attack: Wayne Rooney has missed the last three matches with an ankle injury and he’s set to sit this one out too so Anthony Martial will once again lead the line up front.

With Ander Herrera also out with a hamstring injury we could see Juan Mata deployed in a more central role with Jesse Lingard and Memphis Depay playing on the wings. 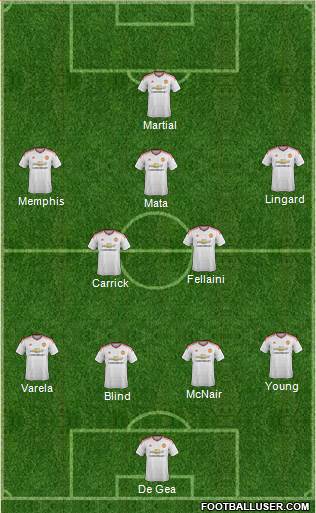