Two players from Arsenal and two from Chelsea have made it in to the WhoScored Champions League team of the group stages. See who made the cut here

Four Premier League-based players have been named in the WhoScored Champions League team of the group stages.

Arsenal qualified for the knockout stages of the competition following an impressive 3-0 victory over Olympiakos on Wednesday night and two of Arsene Wenger’s men have made the top rated eleven so far.

Petr Cech has been hailed as one of Wenger’s best signings after an excellent start to life at the Emirates following his summer move from Chelsea and the Czech international has been the highest rating goalkeeper in the Champions League so far with a score of 7.60.

Alexis Sanchez missed the midweek win in Athens with a hamstring injury but he’s been hugely influential in the group stages for the Gunners and his score of 8.39 ensures he makes it in to the eleven.

Chelsea may be struggling domestically, but they eased into the last 16 in Europe after topping their group with a 2-0 win over Porto on Wednesday night and two of the West Londoners’ have made it in to the WhoScored team.

Cesar Azpilicueta is the top rated left back with a score of 7.60 while Willian – who has arguably been Chelsea’s stand-out player so far this season – booked his place in the top rated eleven thanks to a score of 8.26.

Surprisingly there were no Barcelona players in the team but the likes of Cristiano Ronaldo and Thiago Silva have made the cut, while Bayern Munich midfielder Thiago Alcantara was the highest rating player with a score of 9.07.

Check out the full side here: 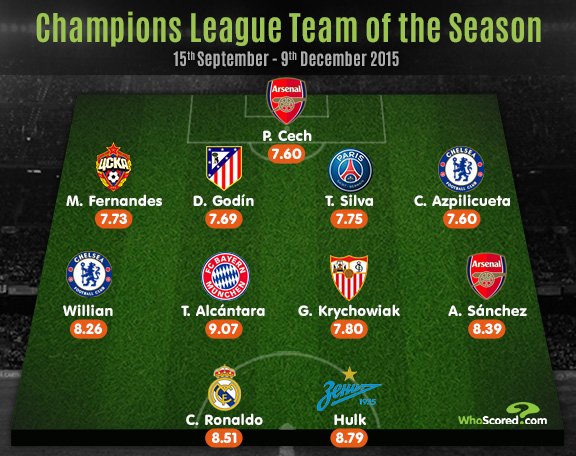