Arsenal will look to move top of the table when they take on Aston Villa on Sunday afternoon. Here is the side we think Arsene Wenger will select for the game:

Arsenal will look to move top of the Premier League table when they take on Aston Villa at Villa Park on Sunday afternoon. Here is the side Gooner Mac thinks Arsene Wenger will select for the game:

Defence: We have no fresh injury concerns for the game after all the players came through the Olympiakos match unscathed. However, I think the boss may decide to make one change at the back and give Gabriel a run-out.

The Brazilian hasn’t feature much in recent weeks and as we gear up for the hectic festive period it’s important the squad players are match sharp so Gabriel could start alongside Laurent Koscielny with Per Mertesacker given a breather. Hector Bellerin and Nacho Monreal should retain their places in the full-back positions but Kieran Gibbs and Mathieu Debuchy are on stand-by if the boss wants to make more changes.

Midfield: Santi Cazorla, Francis Coquelin and Mikel Arteta all remain on the sidelines while Wenger confirmed at his press conference this morning that Jack Wilshere won’t return before the end of the month, so we have limited options to mix things up in midfield.

Calum Chambers is being coached in training on how to play in central midfield but I don’t think Wenger will bring him in just yet so Mathieu Flamini should start alongside Aaron Ramsey.

Attack:  Theo Walcott made a successful return to the starting eleven in midweek but understandably he still looked a little rusty and I don’t think Wenger will start him twice in four days, so Alex Oxlade-Chamberlain could come back in.

Alexis Sanchez remains out with a hamstring injury so Joel Campbell should keep his place in attack after another impressive outing against Olympiakos.

Mesut Ozil will obviously keep start – as long as he hasn’t suffered any ill-effects of the rumoured calf problem he was carrying in midweek – while Olivier Giroud should be full of confidence after his hat-trick last time out. 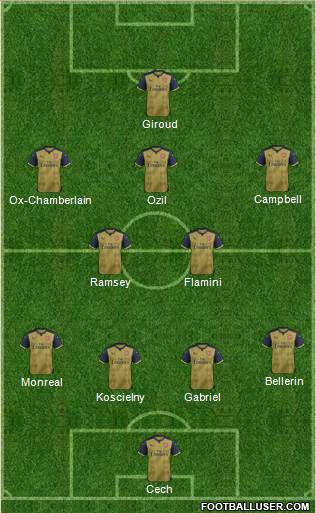 It’s promising to be another exciting weekend of action and I think this eleven is more than capable of getting the win we need to go top of the table, so I’m predicting a 2-1 win. If like me, you think you’re a football expert then why not try out the free weekly score prediction game over at Readies.co.uk and be in with a chance of winning £1000 in cash or even a Lamborghini Gallardo if you manage to predict all 10 scores correctly! The competition closes at 12.15 on Saturday lunchtime so get your predictions in now to be in with a chance of winning these fantastic prizes.

Head over to Readies now and submit your predictions