Tottenham will look to extend their unbeaten run when they take on Newcastle at White Hart Lane on Sunday afternoon. Here’s team news and a predicted line-up

Tottenham will look to extend their unbeaten run when they take on Newcastle United at White Hart Lane on Sunday afternoon. Here is team news and the side we think Mauricio Pochettino will select for the game:

Defence: Pochettino is expected to make plenty of changes to the side that beat Monaco in the Europa League last night with Kyle Walker, Danny Rose and Jan Vertonghen all set for recalls to the starting eleven.

Toby Alderweireld is the only player expected to keep his place in the back four with Ben Davies, Kevin Wimmer and Kieran Trippier all likely to drop to the bench.

Attack: Deli Alli should continue in the free role with Christian Eriksen expected to play from the left-wing with Nacer Chadli likely to be on the bench after recovering from injury. Erik Lamela should keep his place in attack after scoring a hat-trick against Monaco while Harry Kane will be restored up front after being rested last time out. 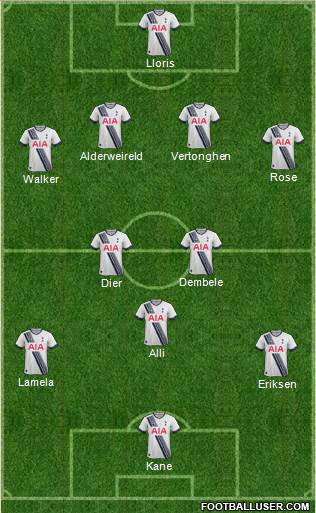