Man Utd will look get back to winning ways when they face Norwich at Old Trafford on Saturday afternoon. Here is the side I think van Gaal will pick:

Man Utd will look get back to winning ways when they face Norwich at Old Trafford on Saturday afternoon.  Here is the side I think van Gaal will pick:

Goalkeeper: David de Gea is certain to start between the sticks once again on Saturday.

Defence: van Gaal’s problems in defence continue as Chris Smalling and Matteo Darmian are expected to remain on the sidelines due to injuries they picked up against Wolfsburg last week. With Antonio Valencia and Luke Shaw also out with long-term injuries, the Reds are low on options at the back.

The good news is that Phil Jones made a late appearance off the bench during last weekend’s shock 2-1 defeat to Bournemouth so the England international should return to the back four alongside Daley Blind while Ashley Young could get a recall in place of youngster Cameron Borthwick-Jackson.

Midfield: Morgan Schneiderlin was back on the bench last Saturday and he should get a recall in midfield with Marouane Fellaini likely to drop out despite scoring last time out. With Bastian Schweinsteiger still suspended, Michael Carrick should continue in the middle of the park.

Attack: Ander Herrera could make his return to the squad after several weeks out with a hamstring injury and the Spaniard could replace Jesse Lingard in attack after he was forced off against Bournemouth with a knock.

There has been no update on the fitness of Wayne Rooney so we’ll have to wait and see what van Gaal has to say at his press conference tomorrow but the striker is expected to once again miss out with a foot problem, so Anthony Martial should lead the line up front with Memphis Depay and Juan Mata in support. 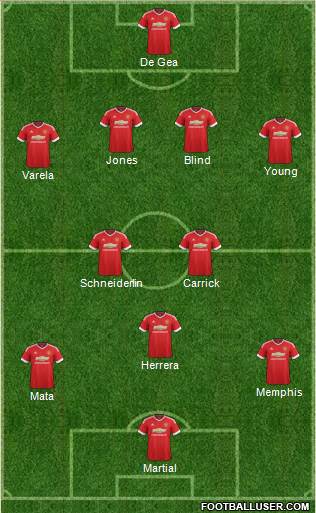