Life without Jose Mourinho will start on Saturday as Chelsea face Sunderland at Stamford Bridge. Here is our predicted starting eleven for the game.

Life without Jose Mourinho will start on Saturday afternoon as Chelsea face Sunderland at Stamford Bridge. It’s not clear who’ll be in charge this weekend so it’s difficult to predict what team will be put out, but here is our best guess:

Goalkeeper: Thibaut Courtois is back after a lengthy injury absence and whoever is picking the team on Saturday will surely stick with the Belgian international.

Defence: John Terry has made a successful return to the first team after an ankle injury so I’d expect the skipper to keep his place but we could see Gary Cahill back alongside Terry after losing his place in recent weeks under Mourinho.

Kurt Zouma would be the man to miss out but Cesar Azpilicueta and Branislav Ivanovic are expected to keep their places in the back four.

Midfield: Cesc Fabregas was dropped by Mourinho for Monday night’s loss at Leicester City but we could see the talented Spaniard back in midfield alongside Nemanja Matic this weekend with Ramires the man most likely to drop out.

Attack: Eden Hazard asked to be substituted at the King Power after an innocuous fall and I’m sure I wouldn’t be the only one not surprised to see the Belgian international start against Sunderland this weekend.

Willian should keep his place while Oscar could once again start ahead of Pedro with Diego Costa leading the attack up front. 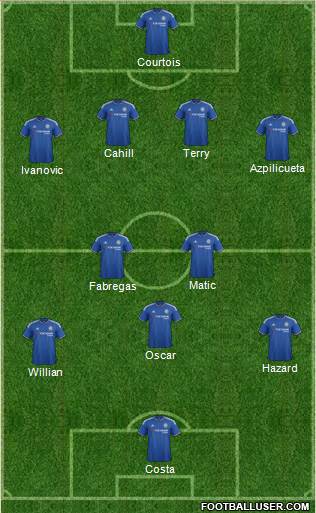