Some of the Chelsea players have been paying tribute to Jose Mourinho on social media after the Portuguese coach was dramatically sacked on Thursday afternoon.

Some of the Chelsea players have been paying tribute to Jose Mourinho on social media after the Portuguese coach was dramatically sacked on Thursday afternoon.

The Blues have endured a disastrous first half to the season with Monday’s defeat at Leicester City leaving the defending champions sitting down in 16th position in the table and just a point above the relegation zone.

Reports of fall-outs with some of the more senior members of the Chelsea squad cast further doubt on Mourinho’s position and owner Roman Abramovich finally pulled the trigger yesterday afternoon.

Cesc Fabregas was the first player to react online following Mourinho’s sacking with the midfielder taking to Twitter to thank the Portuguese coach and wish him luck in the future before Cesar Azpilicueta also posted a heartfelt message to his former boss on Facebook.

John Terry then took to Instagram to upload a photo of him and Mourinho with a message saying he’s the greatest manager he’s ever worked with and thanked the 52-year-old for the ‘unbelievable’ memories.

Check out what the players have been saying below:

Thank you for all you have done for me. I owe you a lot and we will all miss you. Good luck in the future. pic.twitter.com/RQlOTFrtzU 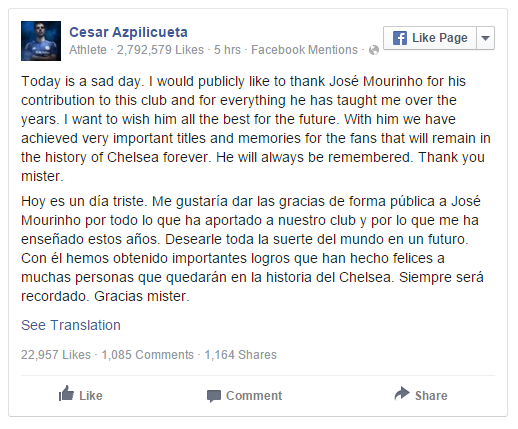