Liverpool will look to get back to winning ways when they take on Watford at Vicarage Road on Sunday. Here is the side I think the Jurgen Klopp will pick.

Liverpool will look to get back to winning ways when they take on Watford at Vicarage Road on Sunday afternoon. Here is the side I think the Jurgen Klopp will pick.

Goalkeeper: Simon Mignolet is expected to keep his place in goal ahead of Adam Bogdan despite his latest gaff against West Brom last weekend.

Defence: Klopp is set to stick with the same back four that shipped two goals at home to the Baggies meaning Mamadou Sakho will continue alongside Martin Skrtel at the back with Alberto Moreno and Nathaniel Clyne keeping their places in the full back slots.

Dejan Lovren misses out with a knee injury but the Croatian international could be back in contention to face Leicester next week.

Midfield: James Milner has been ruled out with a minor calf injury that he picked up in training so Lucas Leiva is set for a recall in midfield. Jordan Henderson has shown no ill-effects since returning from a broken foot so he should continue alongside Emre Can in the middle of the park.

Attack: Daniel Sturridge remains out with a hamstring injury so Christian Benteke should continue to lead the line up front with Divock Origi on the bench despite scoring a late equaliser last weekend.

Philippe Coutinho is set to continue in attack but we could see Roberto Firmino come in for Adam Lallana. 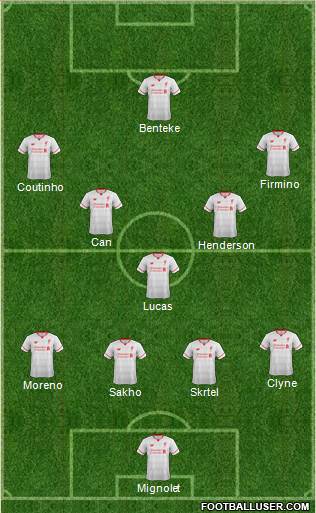