Chelsea & Tottenham Dominate The Premier League Team of the Week

Chelsea and Tottenham Hotspur have both had two players named in the WhoScored Premier League Team of the Week. See the full team here

Chelsea and Tottenham Hotspur have both had two players named in the WhoScored Premier League Team of the Week.

The Blues began life after Jose Mourinho with a comfortable 3-1 victory over Sunderland at Stamford Bridge on Saturday afternoon with Pedro Rodriguez putting the hosts in control with a fine finish to make it 2-0 after just 13 minutes.

The Spanish international’s performances earned him a WhoScored rating of 8.36 which was enough to see him named in the Team of the Week.

Pedro was joined by team-mate Oscar after the Brazilian put in an excellent all-round display to earn a rating of 8.51 which was the highest mark of any midfielder this week.

Spurs on the other hand were hugely impressive in their 2-0 victory at Southampton with Hugo Lloris being named as the best goalkeeper of the week thanks to his score of 8.14.

Kyle Walker also performed well at right-back as he assisted Deli Alli to make it 2-0 and his score of 8.16 was good enough to see him named in the Team of the Week as well.

The highest scoring player of the week was Crystal Palace forward Yannick Bolasie as his exciting performance inspired the Eagles to a 2-1 win at Stoke City. 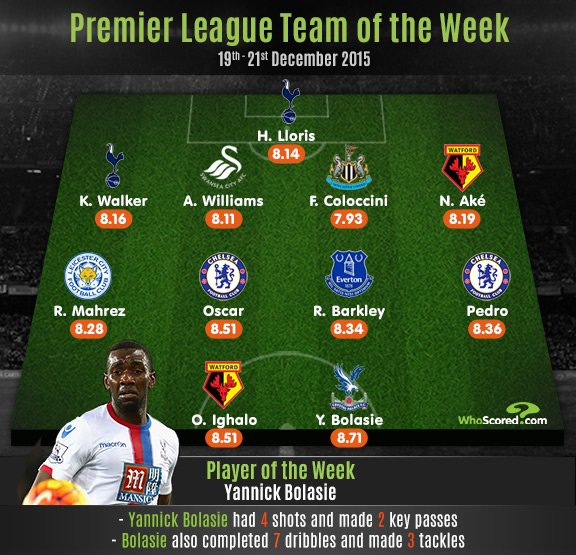