Arsenal kick off the hectic festive period when they take on Southampton at St Mary’s Stadium on Boxing Day. Here is the side we think Arsene Wenger will select

Arsenal kick off the hectic festive period when they take on Southampton at St Mary’s Stadium on Boxing Day. Here is the side Gooner Mac thinks Arsene Wenger will select for the game:

Defence: We have no fresh injury concerns for the game after all the players came through the win over Manchester City on Monday night unscathed. The boss is certain to mix things up and use his squad over the next couple of weeks as we’ve got four games in just 13 days.

However, I think we’ll see the majority of the first team play on Saturday before some of the fringe players get a run-out against Bournemouth on Monday. Therefore, I think Hector Bellerin, Laurent Koscielny, Per Mertesacker and Nacho Monreal will once again start at the back against Southampton.

Midfield: There is little room for change in the middle of the park as Santi Cazorla, Francis Coquelin, Jack Wilshere and Mikel Arteta all remain on the sidelines. Mathieu Flamini has been deputising very well recently and he’ll once again start alongside Aaron Ramsey against the Saints.

Attack:  Alexis Sanchez has suffered a set-back in his recovery from a hamstring injury so he remains unavailable along with Danny Welbeck and Tomas Rosicky. Joel Campbell has been impressing in recent games but I think we could see Wenger freshen things up by handing Alex Oxlade-Chamberlain a start on the wing.

Theo Walcott scored a superb goal against City so I’d be surprised if he was left out while Mesut Ozil was once again in outstanding form on Monday despite feeling the effects of a chest infection. Olivier Giroud should once again lead the line up front. 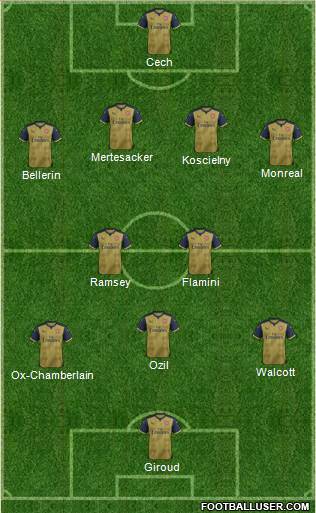