Man Utd will look to address their worrying run of form when they entertain Swansea at Old Trafford on Saturday. Here is the side I think van Gaal will pick:

Manchester United will look to address their worrying run of form when they entertain Swansea at Old Trafford on Saturday afternoon. Here is the side I think van Gaal will pick:

Defence: van Gaal is expected to make one change to the back four that kept a clean sheet against Chelsea on Monday night with Phil Jones coming in for Matteo Darmian. This would see Jones start alongside Chris Smalling in the centre of defence with Daley Blind moving to left-back and Ashley Young keeping his place at right-back.

Antonio Valencia, Marcos Rojo and Luke Shaw are all still out injured.

Midfield: Michael Carrick was left out during the 0-0 draw with Chelsea so we could see the experienced midfielder back in the starting eleven on Saturday. Bastian Schweinsteiger is only just back from a three-game ban so Morgan Schneiderlin could be the one to drop out.

Attack: United were a little unfortunate not to score against the Blues with both Juan Mata and Anthony Martial hitting the woodwork so I think van Gaal may decide to go with the same front four this weekend.

That would see Mata and Martial once again on the wings with Ander Herrera in the free role and Wayne Rooney leading the line up front. Memhpis Depay and Maroune Fellaini are available if van Gaal does want to mix things up but Jesse Lingard remains unavailable through injury. 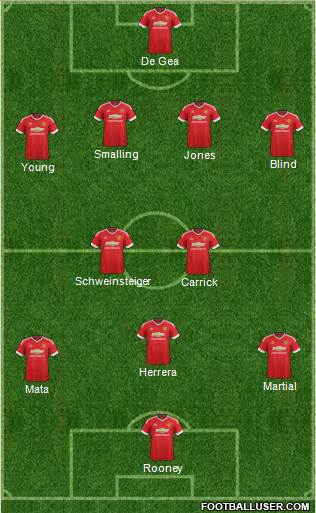