Arsenal boss Arsene Wenger has confirmed that Alexis Sanchez will not be fit in time to make Wednesday’s crucial trip to Anfield to take on Liverpool. 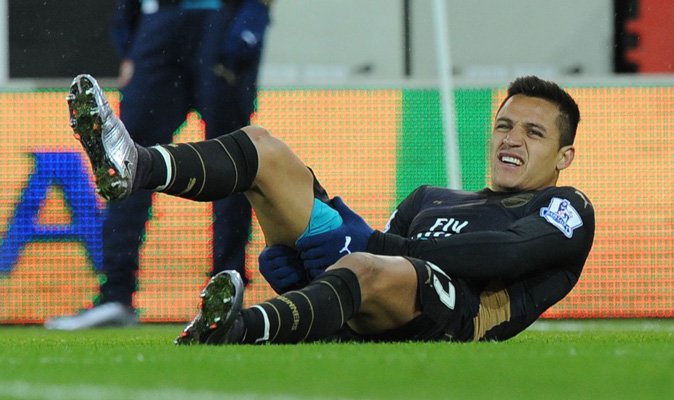 Arsenal boss Arsene Wenger has confirmed that Alexis Sanchez will not be fit in time to make Wednesday’s crucial trip to Anfield to take on Liverpool.

Sanchez has been on the sidelines for the past six weeks after suffering a hamstring injury during Arsenal’s 1-1 draw with Norwich City at Carrow Road in late November.

The Chilean international’s proposed comeback was cut-short after he suffered a set-back in training ahead of last month’s Premier League clash with Manchester City.

There were hopes that Sanchez would feature against Sunderland in tomorrow’s FA Cup third round tie or at the very least make an appearance against Liverpool next Wednesday.

However, Wenger has now not only ruled Sanchez out of tomorrow’s cup clash but the Frenchman says his star man will also be ‘short’ for Wednesday’s crunch trip to Merseyside.

Speaking at his pre-match press conference this morning, Wenger is quoted as saying by reporters:

Wenger says Sanchez will not be ready to face Liverpool but could be available for Stoke next weekend.

The news will come as a major blow for the Gunners as they head into the Liverpool game next week looking to cement their place at the top of the Premier League table.

Wenger is already without the likes of Danny Welbeck, Jack Wilshere, Francis Coquelin, Tomas Rosicky and Santi Cazorla so with Sanchez also set to miss the trip to Anfield, the Arsenal boss is low on options.

The good news for Arsenal is that Liverpool boss Jurgen Klopp has mounting injury worries of his own to deal with so that should compensate for the loss of Sanchez.