Arsenal have been handed a home tie but Chelsea, Manchester United, Manchester City and Tottenham all face tricky away trips in the fourth round of the FA Cup.

Arsenal have been handed a home tie but Chelsea, Manchester United, Manchester City and Tottenham all face tricky away trips in the fourth round of the FA Cup….

The FA Cup fourth round draw has been conducted this evening and once again it’s thrown up some intriguing ties with all of the big-boys being kept apart.

Holders Arsenal eased into the next phase after beating Sunderland 3-1 at the Emirates on Saturday with Aaron Ramsey coming off the bench to inspire a comeback win for Arsene Wenger’s men and the Gunners have now been rewarded with a home tie against Burnley.

Chelsea booked their place in the fourth round after beating Scunthorpe United 2-0 at Stamford Bridge yesterday and Guus Hiddink’s side will now face a trip to either Northampton Town or MK Dons.

Manchester United needed a stoppage penalty from Wayne Rooney to beat League One Sheffield United at Old Trafford on Saturday evening and they’ll now face a tricky trip to Championship side Derby County.

Injury-hit Liverpool had to come from behind to secure a 2-2 draw away at League Two Exeter on Friday and if Jurgen Klopp’s men can win the replay at Anfield they will now entertain West Ham in the next round.

Tottenham will also have to come through a replay after salvaging a 2-2 draw with Leicester City yesterday with Harry Kane scoring a controversial late penalty and the winner of that tie will take on Colchester United away from home.

Manchester City breezed into the fourth round after beating Norwich City at the weekend and Manuel Pellegrini’s side will now face a trip to the winner of Wycombe or Aston Villa in the next phase.

The ties will be played on the weekend of the 29th January and the 1st February.

Here is the draw in full: 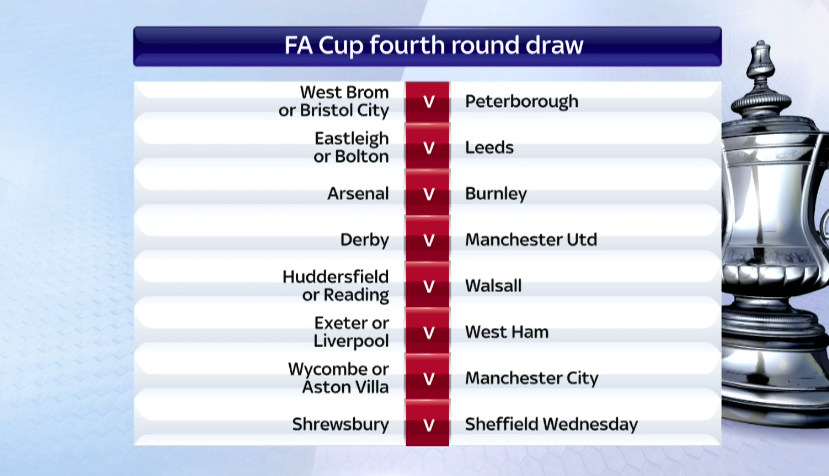 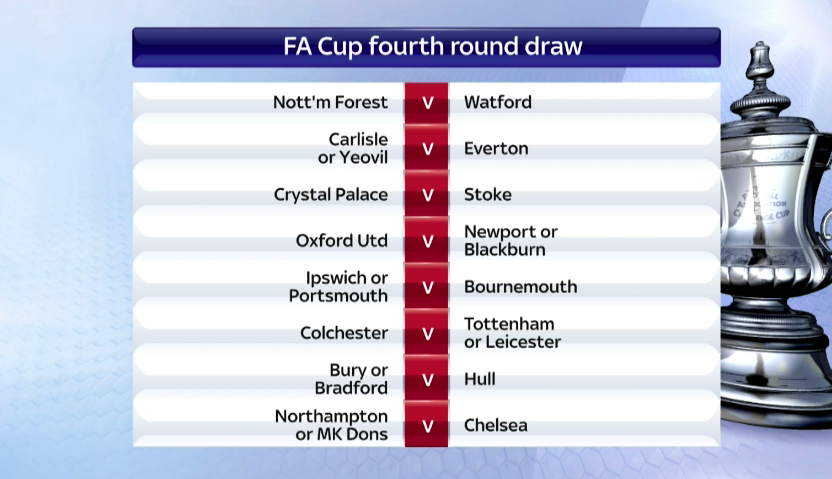